Which console rules the next-gen gaming scene? 2016 year could be one of most defining year in history of video games, with upcoming games like Ratchet and Clank, The Last Guardian, Rise Of The Tomb Raider, Final Fantasy XV and much more. So I think it’s appropriate time to look back at the rivalry of these too consoles almost 2 years after they’ve been launched. It’s true that both of these consoles are getting better and better so it can be hard question when it comes to choosing the right one for yourself. It’s true that both consoles are equipped with some unique exclusives, this plays a big role when picking the console that suits you and your gaming style. I suggest you check out upcoming Quantum Break game which is coming only for XBOX one and for PlayStation 4, check Uncharted 4, in my opinion it’s going to be one of the best games ever made. It’s like playing an interactive movie, with amazing story and characters. It’s also true that if you are not fan of specific genre or game franchise, most of the titles could be played on both of the consoles. 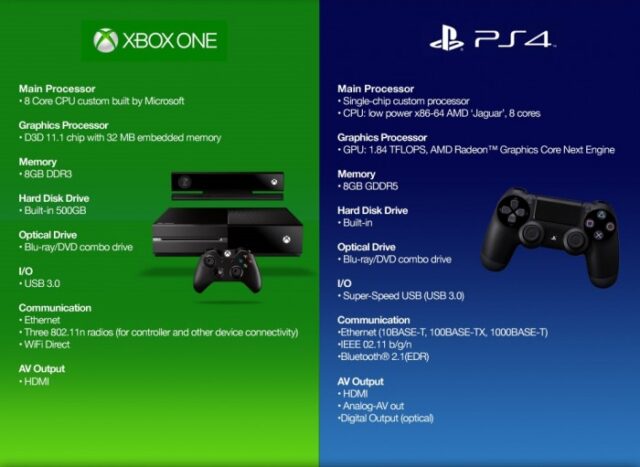 Let’s get ready to rumble. PlayStation 4 is slightly more powerful console because it can run games in 1080p resolution which means in full HD, while XBOX games are running on upscaled 920p resolution. It’s not really much difference but it’s noticeable especially on HD TV’s when running PS4 game. Check out the comparison between both systems graphics in GTA 5 game. 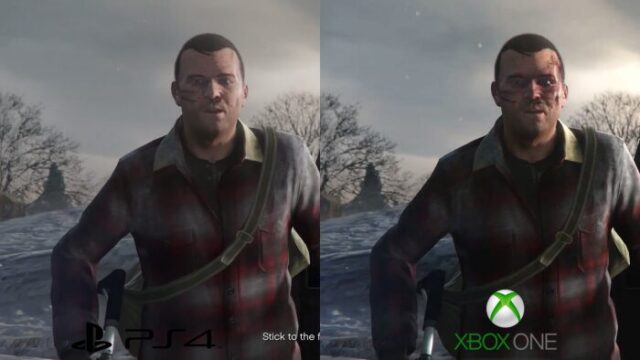 If you wonder which console can play games from the last generation, well the winner is currently XBOX, as it offers backward compatibility with most of the XBOX 360 games. For anyone who doesn’t know what backward compatibility is, it’s the ability for a system to play games from older consoles. A few months ago, PS4 enabled playing PS2 games on the system, but still I think that it should be much more profitable and better for the gaming scene to make PS3 games compatible with the PS4 console. There’s a lot of games that have first 3 parts of the franchise on PS3 and the fourth part is on Playstation 4.

That means you have to buy either a PS3 console or PC to play them so you can understand the story, so I think the best solution would be making PS4 able to run games from older console. Right now there is also another option for this. Sony currently provides a streaming services for older games which is called PlayStation Now, where you can rent the older titles and play them on PS 4, but it’s not available worldwide yet and it requires constant great internet connection.

Even though both of the consoles are mainly used for gaming, they were not built for just for that. The producers of XBOX One, Microsoft, always said that their final goal is making console which will be the only system you need in your living room, honestly they are slowly achieving this. It is because console is now both gaming and streaming system, it can run your programs and operate your cable. Both PS4 and XBOX One provide streaming services such as HBO Go, Netflix, Ustream and others. But winner in this field is XBOX because it enables some apps that can’t be used on PS4. 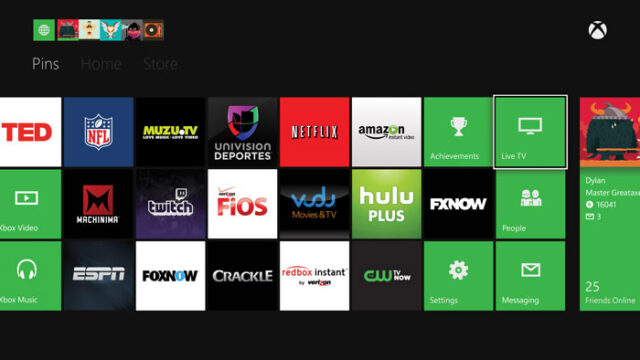 Both of the consoles are offering similar online services, for gaming online, free monthly games, and many other special features if you are subscribed to PlayStation Plus or Microsoft XBOX Gold service.

I’ve never tried Gold service, but as I own PS4 system myself I use PlayStation Plus so I can play games online with other friends, and it’s a lot more fun experience than playing just single player. Both consoles have a really big library of games and if you are fan of digital and not physical disks, you can buy and download game to your console, this way you don’t need to go to store and you can save yourself time doing it. The winner is PS4 because of the little smaller price tag for year subscription, it’s cheaper then Gold service by $10 dollars.

One of the easiest category to pick where PS4 wins is design. It’s sexy, sleek and more thinner and features a cool white-blue light bar on the side. When you look at XBOX it looks much more robust and bulkier. If you put them side by side you really wonder why XBOX is much more bigger then PS4 since it offers more power with smaller build. 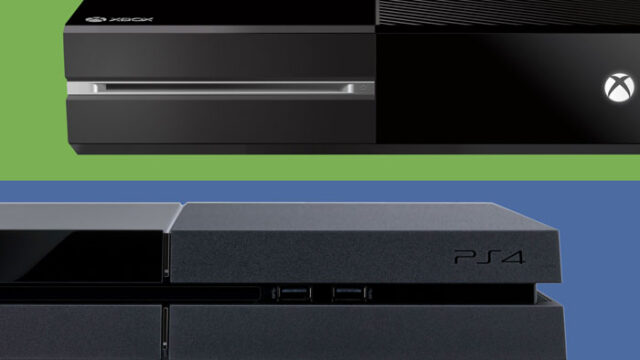 Storage on both consoles is different story, while new additions of PS4 and XBOX both offer 1TB of hard disk space, PS4 has an option of expandable hard disk. You can buy new 2,5inch hard drive and upgrade your console. It will give you enough storage for all your library of games and other data you have. The overall installing process of hooking your PS4 with TV is much more easier then XBOX One, as main menu is simple to understand and use. 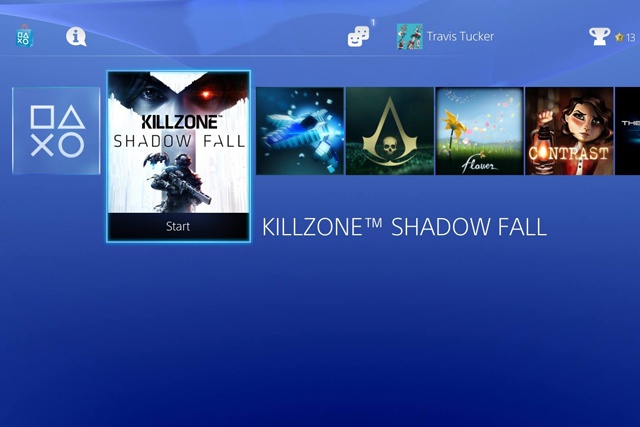 Both consoles enables you to use camera. But there is no contest here at all. XBOX One camera is amazing piece of technology and sure winner. With voice commands and facial recognition it’s really magical core part of your console interface.

What I really like about XBOX is that you can stream your games to tablet or PC if you have Windows 10 installed, pair it up with XBOX One Elite controller and you are ready to have amazing gaming experience. 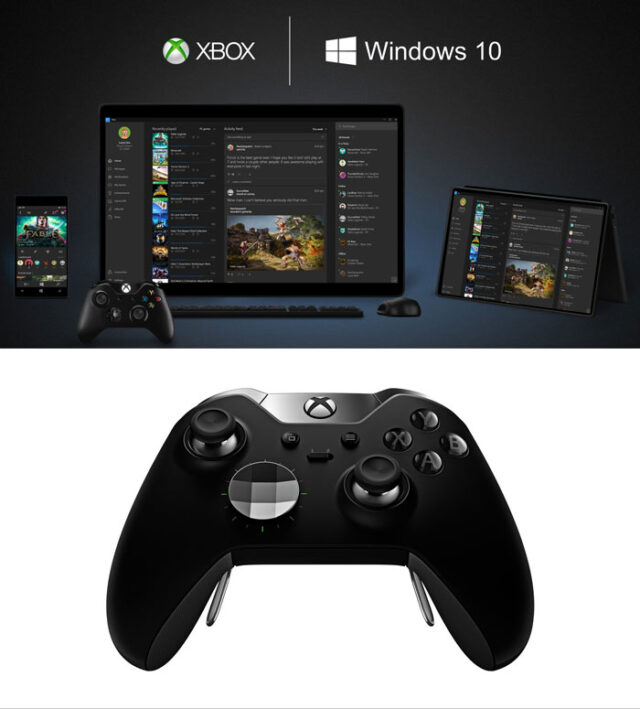 Still, PS4 outshines XBOX one as the best next generation console. It’s not just games that are hot prospect for PS4, it’s the upcoming headset for Virtual Reality. This is becoming the next big thing in video gaming industry as some of the video games are being designed especially for virtual reality.

Even though XBOX is not winner it doesn’t mean that console is fail. I don’t doubt Microsoft have clear vision of improving the system. When you consider everything, PS4 is the real deal. Xbox one is maybe little better when it comes to apps without gaming and content, but if this is your main focus you could get Apple TV or Roku. If you want to play games you will buy PS4 because it’s better gaming machine. At the end it’s really to user demands, so follow the brand which you are royal to. If you are about to buy some of this 2 consoles, for more help in decision check out the infographic below: