Home Daily Infographics Which Is The Best Mobile Platform? 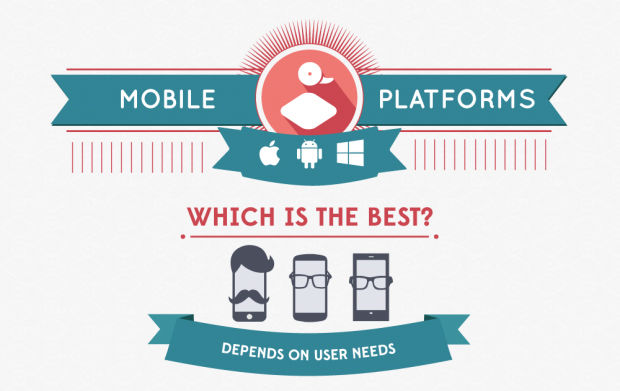 When people are buying a new mobile phone, their usual question is, to which mobile platform should they put their money towards. Choosing your new OS is a much harder choice then it looks on the first. The biggest decision is to choose from Windows, Iphone or Android smartphone. Truth is, they all have their weaknesses and strength but any of these platforms can serve you well, depending on your needs.

Apple is always among most priced phones on the market. It costs around $200 dollars with contract on 2 years, and if you want it without contract you will pay $650 dollars. This means Iphone is not for everyone. Honestly it’s just a brand that you are paying first, because Apple is one of most famous brands in the world, but hardware inside phone is not best as some of the Chinese models or prototypes have it stronger and cost much less. Microsoft on the other hand is always known for producing quality smartphones with relatively good prices, especially after pairing up with Nokia. Some of the manufacturers that were using windows 8.1 platform were world famous LG, Huawei, Lenovo and Samsung brands. When it comes to being affordable, nothing of those 2 compares to Android. You can choose from such a big variety of devices from low cost to high cost smartphones from many manufacturers. Android OS is also leading the market with choice of free apps. I have HTC mobile phone which is of course Android and I love it. 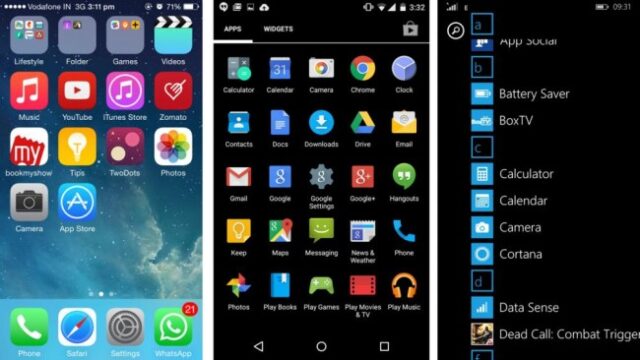 All 3 OS have a nice colorful and minimalist designed interfaces. Android has so much more options and variations than Apple and Windows when it comes to customizing the look of it. This doesn’t mean that Apple’s iOS doesn’t have cool animations and design. Most of aesthetics of platform remained the same and it feels like it’s same paint job over existing 2007 iOS version. If you own Windows platform, you can resize and adjust icons as you wish, as it goes with the grid of Live Tiles. It’s very similar to the look of windows on PC’s. From all 3 OS platforms, in my opinion Windows looks somehow sluggish and stylized too much. The biggest advantage and really cool option is making your phone acting as PC. You can connect your Windows phone to your computer and switch desktop to your phone screen. It can also recognize using keyboard and mouse. In terms of quality and variety of apps, Android is the winner. With Google apps and Google store, it’s a platform where it’s most easiest to develop applications, so usually it’s the place where apps appear first.

All 3 version of OS are having updates regularly. Sometimes there are smaller updates with bug and error fixes and sometimes big ones with almost 1GB updates.

When you’re buying phone, battery life of device should play a big role in decision. Android is again better then Apple, because it will definitely outlast it’s battery life. I love that you can see how much each app is using your energy so you can shut down apps you choose to save battery. You can also download software that will do this automatically for you by scanning for apps in background which spending your battery. Windows 10 mobile also has an option for enabling power saving option. 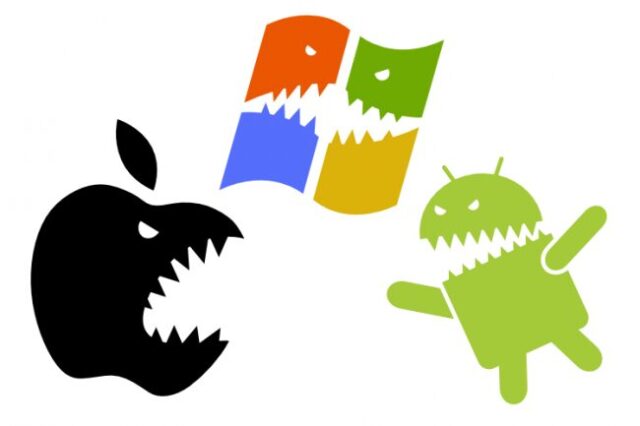 Calling people and sending messages basically works the same in all 3 platforms, along with using e-mail which is very easy to set up and install. If you own an Iphone, you will probably spend more time on peripherals then on Windows or Android smartphone. Apple company made so many accesorries you can buy that go with the phone. It would be also much harder to find charger for Iphone because it uses lightning cable, which is different from Android and Windows phones that are using simple micro USB cables.

The one area where Apple’s Iphone really stands out and shines is 12 MP camera. Apple managed to really capture color, lightning and other details in photo. Even though Windows and android phones like Lumia with 20 MP or Samsung Galaxy with 16 MP are starting to cast some doubt about this, it’s not all about megapixels.

To different people, each of these categories will mean different, so the choice is really yours. Honestly all 3 of them are good platforms having compromises and benefits for users. Personally I am still loyal to Android as I think it suits my needs and taste. So, below you can check the infographic which compares these 3 platforms: