Home Daily Infographics What Exactly Is The Internet of Things? 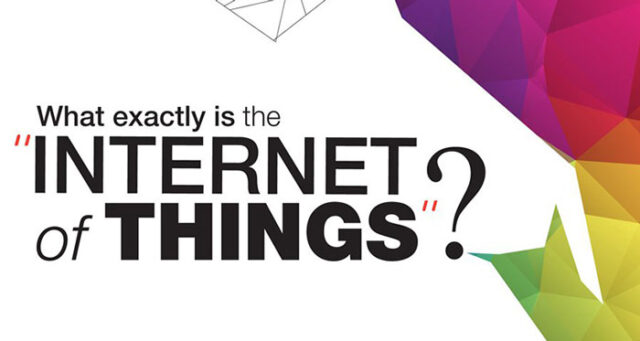 Internet of things is a phrase that we hear a lot in recent time, but what is it really? Infographic below will try to introduce the somewhat misleading term a meaning and explain what the “Internet of things” is, what it consists of and what is it’s use.

With the increase of wearable technologies like Google Glass and miscellaneous Smartwatches and fitness trackers, the term “Internet of things” has entered to the mainstream dictionaries. The term refers to a variety of devices that can communicate and share data among themselves, how devices work with each other and ultimately make our lives easier.

Cars and other vehicles, kitchen appliances, lighting, medical equipment, toothbrushes, buildings, glasses, watches, thermostats, bikes, nuclear reactors, the food in the freezer, etc., are just some examples of things which today we give the ability to communicate.

On the contrary, most of the technology on which the “Internet of things” is based actually existed for some time: mobile phones with the possibility of wireless communication are widely used, the use of sensors in a variety of industries to track the life cycle of a product from the time of manufacture to point of consumption, the use of unique identification system as the bar codes has equally widely used in many countries to introduce smart meters and other devices that allow monitoring economical energy consumption and so on.

So, as was the case with electricity, and many other technological advances that have fundamentally changed the mankind, Internet of things in our lives is involving slowly, and becoming unrecognizable, inconspicuous part of everyday life. Below you can check the infographic which shows what exactly is the “Internet of Things”: