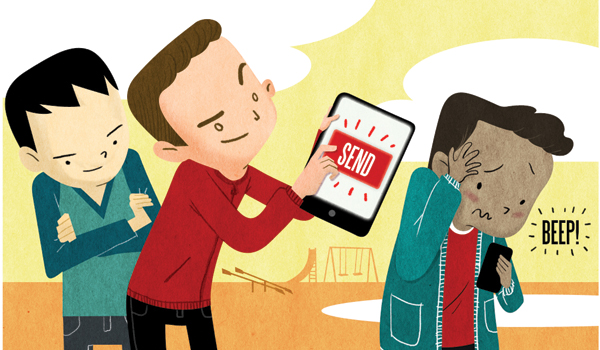 Cyberbullying is a general term for each communication activity of cyber-technology, which can be considered harmful to the individual and the common good. About 25% of children and adolescents has at least once been victims of bullying by means of IT technology, and 75% of them often witnessed various forms of violence on the Internet. There are two types of violence over the internet: a direct attack and attack through intermediaries. Direct attack occurs when a person:

Cyberbullying through intermediaries occurs when the perpetrator attack the victim through a third party, who is most often not aware. For example, a student finds out the password of another student for his e-mail address or nickname to chat. So with his e-mail address can send a disturbing message to his friends, leaving inappropriate messages on the blog, chat or forum. Everybody seems so that the victim is actually the one who does bad things. In this way, the child can experience many inconveniences and be in danger.

Peer violence via the Internet involves encouraging group hatred, attacks on privacy, harassment, stalking, abuse, malpractice access to harmful content and the dissemination of violent and abusive comments. It can involve sending cruel, evil, sometimes threatening messages, as well as the creation of websites that contain stories , drawings, pictures and jokes at the expense of some person.

Cyberbullying is more dangerous than other forms of abuse because it clears the social brake and allows the children to write, say and do things that otherwise would not be able to do face-to-face and have a feeling that for this they will not have to bear the consequences, which gives them a false sense of security and power.