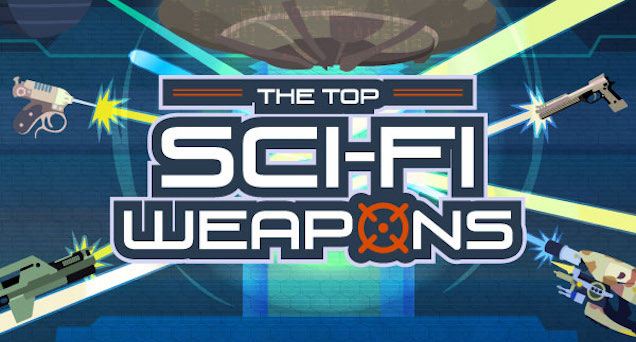 Science fiction is a genre that has almost no borders, and this is reflected by the incredible, bizarre and a tremendously powerful weapons. But which SCI-FI weapons are the most powerful?

The most powerful SCI-FI weapons

We don’t know about you, but we’ve always wanted to try Han Solo’s blaster or sit in the Jaeger and bring him for a walk, with the obligatory destruction of a small town. Not that we are some kind of destructionists, but have such power in the hands would be very pleasant to our ego. Throughout the history of science fiction authors have used many different fictional weapons as an essential tool in the hands of its protagonists and antagonists, so it would be very interesting to see how they stack up in the real world. Take a look at this interesting infographic below in which are some of  the most legendary SCI-FI weapons lined up by the power they have with real word weapons for reference, expressed in joules. Let’s find out which one is the most powerful:

We were really surprised by some of the weapons. For example, who would have thought that the bone from 2001: A Space Odyssey is almost as powerful as blaster from Blade Runner? Or a tiny lightsaber has an energy value nearly identical as the legendary robot Gort from classic The Day the Earth Stood Still? Although it is not something that people can be proud of, but it is interesting to see how the horror of the atomic bomb called Fat Man, which the Americans dropped on Nagasaki is twice more powerful than the spaceship from Independence Day. Which SCI-FI weapons surprised you the most? If you want to find out which aircraft is the fastest in history of science fiction, check out our previous article with awesome infographic.