Home Daily Infographics The Most Hated Internet Innovations Of All Time 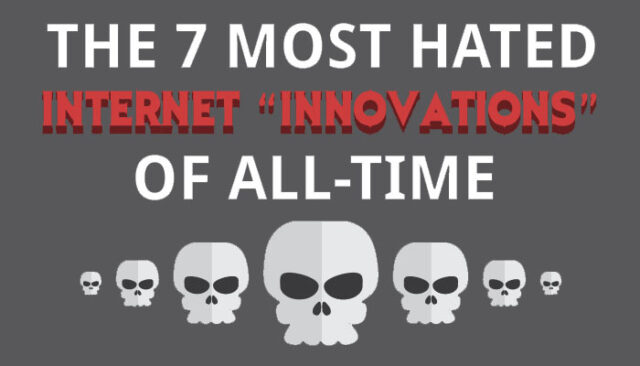 Even though those are inventions from the geniuses of technology, viruses, pop-ups and spams are perceived as internet’s headaches for the community. Were you aware that first email spam was sent back in 1978? After the initial creation of the email, it wasn’t long after when email started to be corrupting. It’s no wonder because today, almost 70% of emails are just pure spam. Spams inside email are not only annoying for users, but are also effective, causing severe and real damage. The internet is constantly changing, and it sure came a long way in last 20 years. But throughout the history of the internet, there have been some bad innovations. Here are some of them.

Are you familiar with surfing online going from page to page and suddenly you are presented with many pop ups of different brands? Well know that the guy who is responsible for this is called Ethan Zuckerman. According to him, they were created to be less intrusive than the ads you see on the homepage. Most known pop ups are in the form of ads where it’s written that you are 1,000,000th customer and you can claim the prize. A study has proven than 70% of online users are saying that they see pop up ads as one of most annoying things online.

Viruses are one of the biggest problems when it comes to computers and surfing online. The person who created first known virus was Rich Skrenta. What an irony this is when you understand that the virus created was actually joke created in 1982 when he was in ninth grade. Name of the virus was Elk Cloner. If you want to understand how much viruses are damaging just know that 2 years ago the annual cost of cyber crimes that are connected with the global economy are estimated around $400 billion dollars.

I hate captchas. Every time you type your password wrong, you will be presented with captcha that will require from you to prove that you’re not a robot. Captchas can especially be a problem for people who have sight problems and dyslexia. There are also audio captchas which are even harder to decode. It’s estimated that there are more than 200 million captchas typed in each day, and users are spending around 10 seconds to complete it. 500,000 hours is a time spent by user, proving every day that they are human beings.

Are you familiar with going to YouTube and not being able to watch some video because it’s restricted in your country? This is also one of the worst problems. In order to bypass this and be able to watch any video you need to use virtual private network, which I talked about here. 17% of online users from US are already using VPN.

Years ago, when users visited webpage there was no way to know if that person was already there. Those were the days without internet cookies. Not until, Lou Montulli created cookies back in 1994. There’s a big downside to this and how it’s affecting someone’s web privacy. This is a big problem and almost 90% of US online users are taking different steps in order to secure their footprints on the internet. Those are some of the most hated innovations on the internet of all time. What are yours?