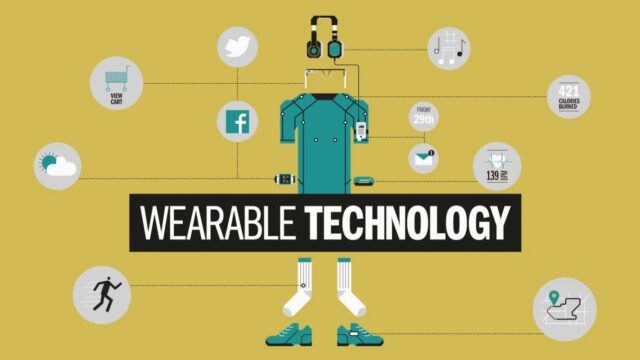 The History of Wearable Technology

Through the history and development of wearable computing, this vision has been both contrasted and affirmed. Affirmed through the multiple projects directed at either enhancing or extending functionality of clothing, and as contrast, most notably through Steve Mann’s concept of sousveillance. The history of wearable technology is influenced by both of these responses to the vision of ubiquitous computing.

Sony Ericsson teamed up with the London College of Fashion for a contest to design digital clothing, and the winner was a cocktail dress with Bluetooth technology making it light up when a call is received. Zach “Hoeken Smith” of MakerBot fame made keyboard pants during a “Fashion Hacking” workshop at a New York City creative collective. Graduate students from the Tisch School of Arts in New York designed a hoodie that sends pre-programmed text messages triggered by gesture movements.

Prototypes for digital eyewear with heads up display (HUD) are being developed. The US military employs headgear with displays for soldiers using a technology called holographic optics.

Wearable Technology is on the rise in personal and business use. In healthcare, many examples exist to date. Google Glass is a much noted device, offering promising technology but to many, pricey and awkward in use. Smartwatches so far have not been deployed much, as limited functionality and clunky aesthetics may get in the way.

Some other devices are already in use, others still on the horizon—that wearables could be useful in professional and patient settings. Medical Professionals such as Google Glass Surgeon have now organised themselves in WATCH-Society  the Wearable Technology in Healthcare Society, in order to search for collaboration and valid use of wearable technology in healthcare.

The Society is a not-for profit organisation and open to all envisioning co-creation, collaboration and scrutinization in order to help healthcare from multiple professional viewpoints.

On April 16, 2013, Mountain View corporation Google allowed for those that pre-ordered its wearable glasses at the 2012 Google I/O conference to pick up the device. This day marked the official launch of Google Glass, a device that brings rich text and notifications as well as other information straight to your eyes.

The device also has a 5 MP camera and records 720p. Its various functions are activated via voice command. The company also launched the Google Glass companion app, MyGlass, the day before the official launch on April 15. The New York Times’s Google Glass App is the first third-party Glass App and it reads articles and news’s summaries.It is also the first media app for Google Glass.

At CES 2014, wearable technology was a popular topic, and the event was coined the “The Wearables, Appliances, Cars, and Bendable TVs Show” by many industry influencers. Several wearable products that were showcased include Smart watches, SmartBands, Smart Jewelry, glasses, and earbuds.

Check out infographics about The History of Wearable Technology: