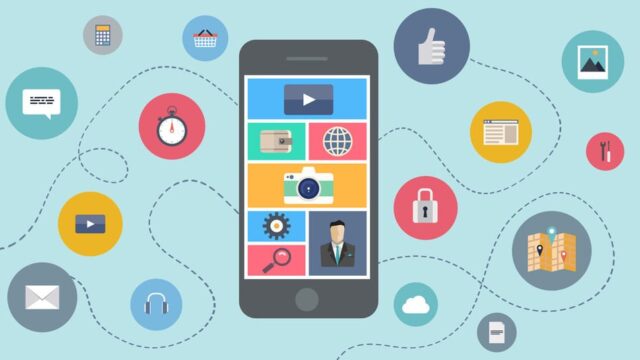 Everyone loves mobile apps. Whether it is popular mobile game or business app. But what is mobile application exactly? In the most basic way it’s computer program designed, developed and generated to run on smartphones, tablets, iPhones and other mobile devices. The whole world has accepted the fact that with apps we can get the most out of smartphones. With that being said, it’s interesting to trace the history of app development. If you go back in time, not long ago all that was perceived in the category of apps were calculator, monthly calendar and Java games. But, the first smart phone was created in 1993 by IBM. It was equipped with features such as world clock, calculator, contact book and calendar. Next big breakthrough in the field of apps for mobile and their development was released with a blackberry smartphone in 2002. But when the world of apps and mobile phones started?

First call from a mobile phone was made by Motorola men, Dr. Joel S. And it took almost 20 years of development and researches to create first mobile app for smartphones and the person who did it was a guy called Simon from the famous IBM company, who was the first one to introduce apps to the world. The first apps were built up inside portable devices developed by Psion that worked on the EPOC operating system. This system was popular in early 90’s. Those were 16-bit machines that had programs like diary, word and spreadsheet. 4 years later the new device came out called Palm OS, also known as Garnet, developed by Palm Incorporation for being the personal digital assistant. This device came with few of basic apps and many third party programmed apps. After Psion, came Symbian. This was a joint venture of Ericsson, Motorola, Psion and Nokia. Symbian was actually operating system that was running on around 250 million devices until 2009. It was used on LG, Samsung and Nokia handsets with apps like calendar, FM radio, phonebook, calendar, browser, camera, music player and many more..

I can still remember one of my first game ever, the classic snake game on Nokia. It was first introduced back in 1998 as built in game for Nokia cell phones and quickly became a sensation globally. I think the real birth of apps as we know them today happened in 2007 when Apple launched their iPhone. But what makes apps for mobile so popular among users? I think that most of the apps on smartphones are very easy to access and they are also making our life much better and productive. As the saying goes, there’s an app for almost anything and that is becoming true. There are probably millions and millions of different apps by now. There are apps for social media, banking, health, travel, news, calendars, games, fitness, you name the area and I’m sure there’s an app for it.

Here are some fun facts about apps. Did you know that Apple store is adding 20,000 new apps each month! China is the country with most phone users. There are more than 30 billion download of apps for iPhone in total, while for Android platform around 15 billion. An average user has around 40 apps on their smartphone. The market for apps is growing each year. 2 years ago we had more than 140 million downloads while it’s estimated that next year that number will reach around 270 million. According to one study, in the year 2014 there were almost 20 billion developers of various app softwares around the world and this number will grow to 25 billion by the year 2022.