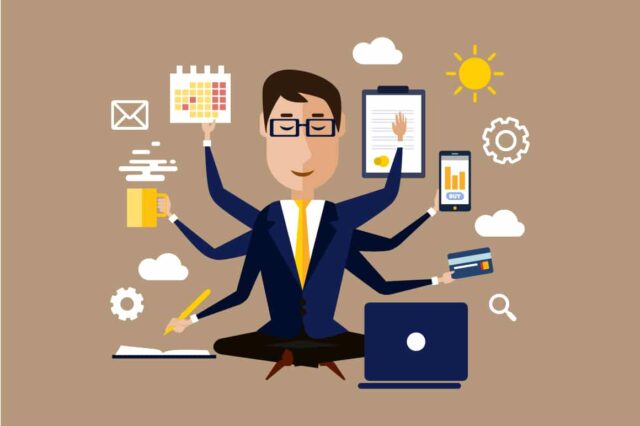 Today, in this technologically advanced era, people are multitasking everywhere. Whether it’s kitchen table, or modern office, from chat notifications to emails, there is always ” that something” that is occupying our minds. The biggest problem that comes from jumping from task to task is that we’re not getting anything done completely. Someone could say that we are now in an era of distraction. Even people on the street that are using smartphones are multitasking, doing a few things at the same time on the screen. It should not be surprise, because when you look realistically, humans are practically wired to multitasking with so much access to different types of technology. Well, here’s an interesting fact. When people are multitasking they are experiencing 40% productivity drop. That’s right, and what’s even more it takes a much more time to finish just one task. Also, when we’re trying to complete multiple tasks on our regular daily list of activities we are having an increase level of stress.

It is estimated that, when it comes to multitasking, only 2% of entire population could actually be efficient. What’s even more ironic is that those individuals are less likely to perform any type of multitasking. The real problem is that everybody thinks they are in those parts of 2%. Recent studies have actually indicated that the people who usually multitask most of the time are actually really bad at it. In one recent study performed on participants, the majority of them judged themselves to be more than average when it comes to ability of multitasking. So, don’t be confident you’re at that 2%, which can do it, but better focus on completing one task at a time. Why bother with one task? Well, if you’re jumping from a few tasks at the same time, for you, it will not seem like a long time at the moment, but be sure that those small time wasters will be felt at the end.

I think you should want to get that 40% back of your time for being productive. When you think about it, it’s 16 hours each week! I think that’s a really big amount of valuable time. In order to prevent this, it’s important to identify the situations when doing a few tasks at once costs you a lot. Are you worried about missing some story on Facebook or other social media network? Does every sound of notification draw your attention to PC? Maybe you are focused on doing too much at the same time. Whatever it is, when you identify if it will help you to shut down that trigger, while allowing you to focus more and complete your work. So, the real question is, how much time you can actually get back?