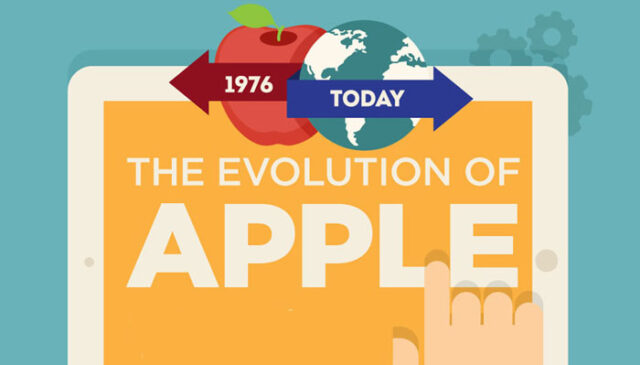 Apple was founded back in 1976 on April 1st. The company is now more than 40 years old. It is interesting to see how the company was actually created in its early days. The story is usually the same. It’s a tale of few friends, one old garage and starting from humble, small beginnings. Back in the day, in this story there were 3 friends. Even though most visible founders are Steve Wozniak and Steve Jobs, if it wasn’t their friend Ronald Wayne we maybe could never have iPad, iMac or iPhones today. Steve Jobs told Wayne to take his 10% of company but 12 days later Wayne backed out, selling his holding for just small $500 dollars that would today worth around astonishing $72 billion dollars. Steve Jobs was at that time just a 21 year old dropout from college that had lived with his parents. What they first had on mind was trying to create a rock band.

The first Apple PC would now look totally antique, if you judge it by today’s technological standards. It was built by both, Wozniak And Jobs.  It didn’t even have a case as it was more of a do it yourself type of kit. The price for buying Apple 1 was $666 dollars. Don’t think this is for reasons of satanic nature. Wozniak once said he likes repeating numbers. At the time, Byte shop which was early PC store sold more than 200 units.

People always wonder what is the inspiration behind the name for the company.  The name for company almost caused problems because it was so similar to the publishers of Beatles, Apple Corps. It was named during one of Job’s fruitarian diets. On the naming of company, he said he was “on one of my fruitarian diets.” He said he had just come back from an apple farm, and thought the name sounded “fun, spirited and not intimidating.” After Apple 1 it was time for the debut of second edition at the Computer Faire in 1997. They were going in a battle head to head with big brand names like Commodore for example. At that time Apple 1 was considered a groundbreaking piece of machine. This is by some experts perceived as the era which ushered Steve Jobs into more personal computer  industry, and to this day Apple 2 was a true innovation. The Apple was never slow when it comes to innovations.

After debut of Apple 1 and 2 people where wondering where the company will go next.  In 1984, Steve Jobs introduced Macintosh. It was a total pandemonium. Macintosh was priced at $2,495 dollars and it was first computer with graphic user interface that was affordable. By this time, company already proved that they are the force to be known.

Along the following years Apple released new products but nothing so groundbreaking as first iMac that was introduced back in 1998. iMac had 2 things that immediately made it best selling PC in America. It was a unit that didn’t require almost any type of setup, without any monitor cords that you usually have between computer and monitor.

3 years after the debut of iMac Apple was teasing the public with special invite for their newest product. It was the iPod. You could not even describe the total mania that followed after this. Even though Apple released many things over the years iPod was in its own category. It was portable music player priced at $399 dollars and quickly turned into one of Apple’s best selling gadgets. Since its debut, Apple sold more than 400 million iPods.

While Steve was working on a number of things he released new operating system called MAC OS X. It was released in march 2001. Many people switched from Windows to MAC for its speed, ease of use and stability. In 2003, Napster, which was famous music online store has been shut down because of violated copyright laws and Apple had launched iTunes with an offer of 99 cents per each song. In first week iTunes had managed to sold around 1 million songs and within 1 year it released more than 50 million tracks.

After the success of iPod, people began to talk abut whether Apple is able to go inside market for smartphones. It was January, 2007 when all the speculations stopped when Apple announced release of iPhone. 3 years later Jobs unveiled yet another product. This time it was iPad. Some said it was nothing more than just a giant iPhone. They were not far from truth but many people loved the idea. With all these breakthroughs and innovative gadgets Apple has become one of most valuable and famous companies in the world.