Home Daily Infographics The economic impact of the Internet – Infographic 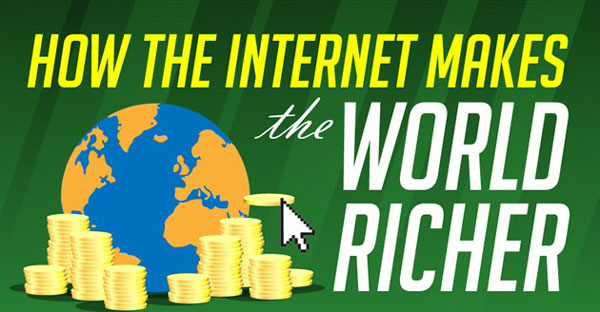 In the information economy, productivity and competitiveness of companies depends on their ability to create, process and implementation information based on knowledge and relies on intensive use of information technology. Information economics is global, highly productive and includes profits arising from the speed of innovation.

Some of the terms that refer to the same phenomenon, only they emphasize different aspects are the knowledge economy, the new and network economy. The impact of the ICT revolution is reflected in the emergence of e-commerce, ie. Business transactions using electronic communication and digital technology. The new technological revolution resulted in changes in the labor market.

It is full of interesting and instructive information. So, among other things, you know that there is a 2.9 billion Internet users, which is about 40 percent of the world’s population.

The market of mobile phones and tablet swells. By 2017 it is expected that the amount of data that passes through mobile devices will increase 13 times compared to 2014. It is expected that in 2015 the payment via the mobile phone finally boil. Studies conducted by Portio Research indicates that payments via mobile-devices will exceed a trillion dollars ($ 1000.000.000.000!) By the end of 2015.

Number of users over the past five years grow 10.8 percent annually. Since 2005 almost tripled. Almost half internautica and internauta in Asia, mutton in North and South America, and only nine percent in Europe.

7 Curtain Tips and Ideas to Make Your Room Look More...

How to Build a DIY Veranda to Upgrade Your Backyard

Can You Power Your House Only With Solar Panels?

What is a Door Gift?