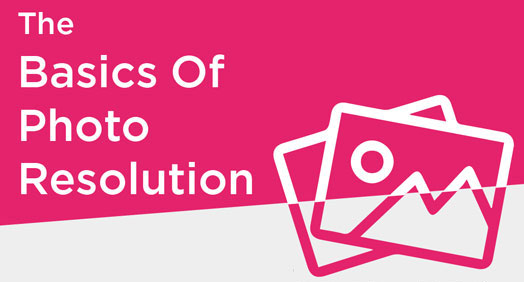 Image processing or photos is almost as old as photography itself. Ever since the birth of this profession, photographers were trying to improve their image in every possible way, even though they had been quite limited. After recording, processing was only for professionals and enthusiasts who have the time, knowledge and patience. By the photo processing, we are trying to make good picture, even better, but sometimes people just go too far. Therefore we decided to introduce beginners with the basic terms related to photo resolution, so if you are one of them, be sure to check the infographic below:

Resolution is size that defines the possibility of separation / detection of small details to describe the quality of the image. In the classical photographic film resolution is determined by the number of lines that can be seen in the millimeter film. The digital technique resolution is measured according to the media.

For paper documents resolution is the number of dots that make up the image per square inch (dot per inch – DPI). The quality of printed or captured image does not depend only on the resolution of the device, but also on the quality of the image itself on a computer or on paper.

The higher resolution typically allows greater increase while maintaining the sharpness of the display. The digital technology of higher resolution require a significant increase in memory capacity for storage of material (photos, videos).