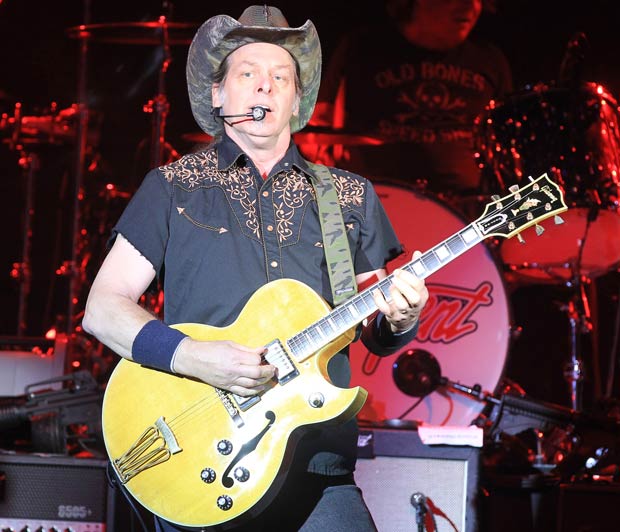 Rocker Ted Nugent is bragging that he killed more than 400 wild pigs in a Texas field last weekend and RumorFix has the details.

Nugent, who has been touring for over 50 years, tells Brett Winterble on XM 166, “I took my machine gun in the helicopter — in the Texas hill country — me and my buddy ‘Pigman’ … his name is ‘Pigman’ — I’m the swine czar. I killed 455 hogs with my machine gun. i did it for Bill Maher and all those other animal rights freaks out there.”

The radical right wing musician has done this before. In fact, his exploits were documented last September on the Sportsman Channel.

Nugent says he fired off 750 rounds a minute. He knows this so-called sport isn’t making him popular with a segment of the population. “My haters will hate me more for that,” he proudly states.

But he claims, “We saved the environment from the destruction of these out-of-control pigs and I’m not talking about Washington D.C. or San Francisco … I’m actually talking about actual pigs.”

His says his actions help save farms and taxes and wildlife, “because the hogs destroy all the ground nesting birds, they destroy all the turkey eggs and all the quail eggs — they eat and kill fawns — they erode the land and destroy habitat”

And he says “we distributed tons of the most delicious pork to the soup kitchens and homeless shelters of this state. Everything we did was perfect — win win win.”

The 64-year-0ld concluded, “I had to adjust my halo as I was machine gunning hogs