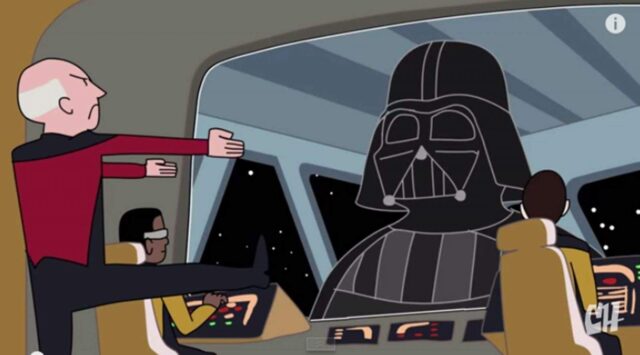 There are 3 subjects that people should never discuss at the table: politics, religion and Star Wars vs Star Trek. In head to head battle, factors that are most important for space wars are range, accuracy and speed. The crucial thing of both of these universes is technology. Often fans appreciate both of the franchises, but sometimes express total hate for just one.

Both Star Trek and Star Wars are equipped with hardcore artilleries of many varieties, but if the battle ends up on Vulcan neck pinch vs the force I think there is no contest at all. When it comes to personal weapons I think the sure winner is Star Wars. They feature blasters, and lightsabers which is also the signature weapon of the force. Blasters are creating plasma that can go through almost anything. Lightsabers are used by elite Sith or Jedi warriors, and if someone has one they are looked as if holding high prestige status.

On the other hand, Star Trek features stun and photon grenades, with their signature weapon being phaser particle gun. Phasers are shooting beams of particles, some of them are also plasma guns. They can cut through shields or hulls with the possibility of adjusting other effects like cutting, stunning, heating and killing someone instantly.

The next category of competition are vehicles and fighters. I think that the Empire of Star Wars has much more developed ground units and smaller fighters. In the movies we can see many combats on the ground with tanks, drones and behemoths, while in Star Trek the only combat that virtually exists is person to person. And also, how could I forget the Millennium Falcon of Star Wars. Sure it’s a tough choice if you put it side to Enterprise but, consider how big of an impact that ship had among the people by appearing only in 3 movies, while Enterprise appeared in every Star Trek movie.

But Millennium Falcon is not the only one iconic ship from Star Wars saga as there is also Slave -1 model which features missiles of 190 megatons, and has over 64,000 primary guns. There is practically no star system that this ship is unable to reach, and no planet it cant find. Both Star Trek and Star Wars universes are having almost equal weapons of mass destruction at their fingers. Star Wars has Death Star, which is space station size of a moon equipped with super powerful laser beam. The power of that beam is estimated in 20 billion trillion megatons. Star trek has Borg tactical cube which has many engaging capabilities from tractor and beam weapons to pulse weapons. This one is a tie because Borg cube is also functioning as space station and it’s highly competitive to the Death Star of Star Wars.

So, who has more resources?

If you can recall the battle in Return Of Jedi movie, Star Wars universe has more then 1,000,000 planetary systems. It is 10,000 light years in diameter territory area and counts 2,000 trillion people as a whole population. Star Trek is much smaller with 1,000 to 5,000 planetary systems with 150 members of federation. The only thing where Star Trek wins is that they have time travel. It looks like Empire has much better and plenty of more resources, which makes Federation looks pale when comparing. Even though I used to watch Star Trek TV show and few of the movies, I prefer Star Wars and I think it’s way better.