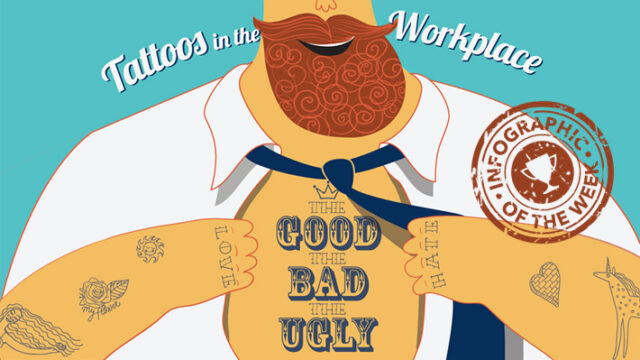 Tattoos and body piercings are becoming increasingly popular. 45 million people in the U.S. have at least one Tattoo. Most bosses, though, do not approve of such body art on their workers. Nearly 40 percent of HR managers in the U.S. say they would be less likely to offer a job to someone with visible tattoos or body piercings and which 42% of people in that country think, is inappropriate for the workplace.

This infographic from Skinfo.com takes a look at this issue:

Perhaps surprisingly, the lowest percentage of tattooed people are IT, manufacturing and engineering, design and construction – roles that don’t involve that many public-facing people, and therefore have to worry a lot less about the immediate impression that a piece of skin art might give.

There may be bad news for those with tattoos in the south seeking employment, as 55 percent of the region perceives tattoos as inappropriate for the workplace. This is the highest region in the country by seven percent. Only three in 10 human resources managers in the country felt that bad breath and piercings were bigger red flags than visible tattoos, and zero states in the nation have laws protecting tattooed people from discrimination in company hiring practices.

Knowing this, would you cover up your tattoo to get hired? Fourteen percent of people who have tattoos regret their decision, but to remove their ink, it’s going to cost a pretty penny. The U.S. national average in 2013 for tattoo removal reached $588. That number is growing and is expected to reach a total of $83.2 million 2018.

What You Need To Accept Credit Cards Checklist – 2023 Guide