Home Infographic Design and Marketing SSD vs. HDD – Which One To Choose

Even “average” computers now has an SSD which as a system disk has become completely indispensable for many. However, not all the facts are on the side of the SSD, and accordingly to this you should buy. The hard drive can not be forgotten, because it has several advantages that will be very difficult to accomplish by SSD. Therefore, if you are in a dilemma “for and against” lists can be very useful.

So, you are in dilemma which one to choose – SSD or HDD? The first and the main difference is in the concept of storing data. The hard disk drive is supported on the magnetic plate which is rotating at high speed at which the data are entered via a head which is connected to the controller and the cache memory. SSD or Solid State Drive, use memory chips and, as such, has no moving parts, but the classic flash memory as a storage medium.

Regardless of whether we are talking about sequential speed when copying or access speed to random data. SSD controller instantly comes to addresses in the memory, and the hard drive has to move his head to the right position and find the information recorded on the magnetic board. Therefore, differences in random access are enormous.

Noise is also an important factor, a hard drive, which has moving parts certainly produces some noise. Some of course more, some less, depending on the quality, but also the focus of manufacturers. However, most of the HDD must produce noise. Especially when they intense start to seek information on the magnetic board. SSD has no moving parts, and accordingly is completely silent.

SSD is also more grateful when the electricity bill comes. Its low consumption is not always to the same extent before the hard disk, as there are energy-saving versions. However, in general, the SSD is certainly more energy efficient.
Thus, the SSD is more reliable, quieter, faster and more resistant, does that mean that it’s unreservedly better? In the sense that it’s the more modern component technology, it’s absolutely true. However, one item can not even in the slightest degree to be compared to a hard disk, and this is the price per gigabyte.

It is several times more favorable for the benefit of the hard disk, and the cost of the SSD, which has a capacity of 240 GB, you can get a HDD of up to 3 TB! Therefore, it remains only a matter of what is your higher priority, and many will not think even a second before they decide for the HDD. So many movies, music games would never fit on the SSD.

The ideal combination is to have a SSD as a system disk and the hard drive for the storage of data. But, it’s up to you to decide, so below you can check the SSD vs. HDD infographic which should help you in decision: 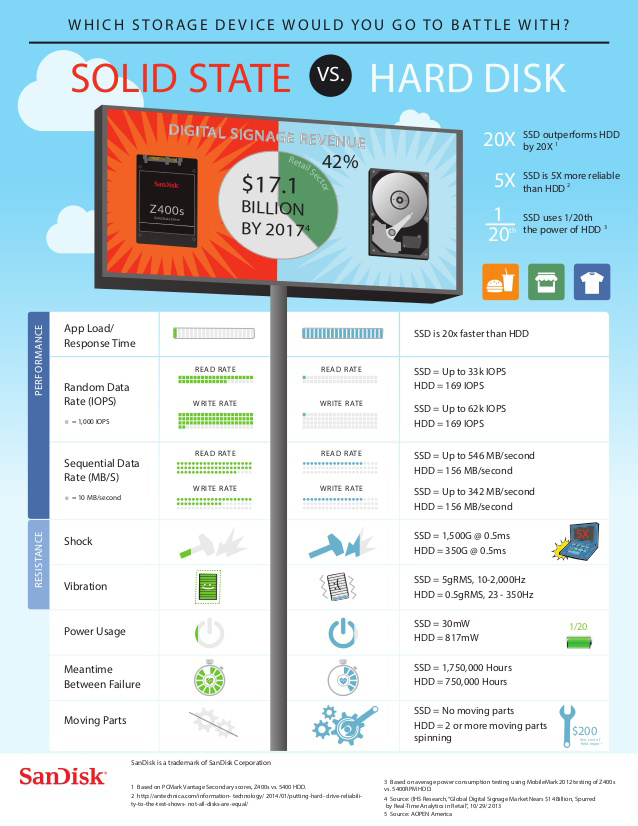