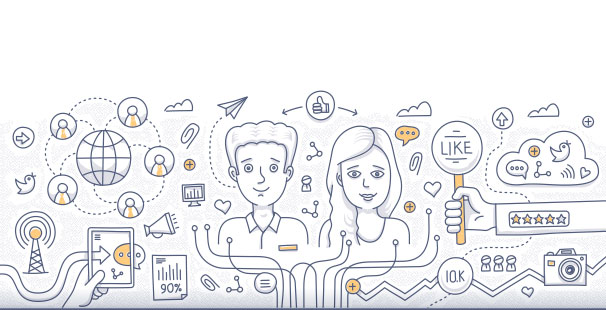 Social networks are something that we use every day. The development of social networks is a topic on which is discussed daily.  Of the largest social platforms, 2015 Facebook has only recorded a decline in active users, which amounts to nine percent. At the same time, a group consisting of YouTube, Twitter and Google+ achieved growth of between six and 13 percent. However, smaller and specialized platforms achieved the fastest growth rate. There certainly have to be mentioned Pinterest (+97 percent) and Tumblr (+95 percent), which recorded by far the largest and most impressive growth. Of course, smaller social networks are easier to achieve a higher percentage of growth since they are moving from the lower starting point. Although this is not a justification to Facebook’s current decline.

The trend to use more social networks so called Multi-networking became more intense. The average user of Facebook is now active on four or more social networks. The rise of smaller, alternative platforms prompted some users to go from Facebook. For example, Pinterest with image content, Instagram with photos, Tumblr as a fast-growing blog network. Great influence and expansion experienced applications for correspondence like Snapchat, WhatsApp, WeChat and others, because the conversations that were for the most part take place on Facebook, now migrated to other platforms.

In addition to these social networks, the highest growth has experienced the Snapchat last year (2015) when the figure exceeded 100 million active users, which have become the fastest growing social network in the world. But this figure is constantly growing and growing, as well as its popularity.

We can only guess what will happen with social networks in the future. People can be quickly saturate by something, but also some things can become viral in a short time. Those who should have pay attention the most to the fall or rise in popularity of social networks are business people who advertise through the same. They may want to follow trends in order to know to which social network they should pay more attention.