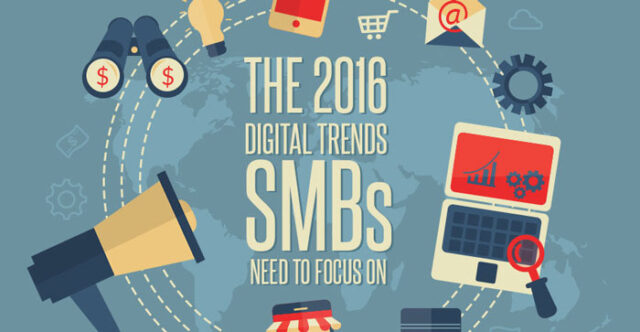 Every day a new article goes live which tells the SMB owner about a new digital trend that they need to know about. What should the discerning SMB owner focus on to realistically improve business?

2016 will bring greater technological improvements, from rise of the information apps to rise of mobile trade. Here are some more digital trends for 2016,  with the center of attention given to an even greater impact of mobile platforms:

THE VOICE OF THE CONSUMER WILL BE HEARD

Literally. Voice-activated search on smartphones and voice commands in other devices, for example in cars, will gain in strength because these “assistants” are getting smarter. Besides, the number of other smart devices is on the rise – from smart watches to connected home devices.

Marketers need to be prepared to optimize digital content for speech activated queries, and learn how to make sure that “personal assistants” can find their content.

MARKETERS WILL JOIN THE CONVERSATION (IN MESSAGING APPS)

MOBILE PAYMENTS WILL TAKE OFF

Mobile wallets will become a standard feature of newer smartphones and more retailers will offer payment possibilities through systems such as Apple Play, Android Pay, Samsung Pay and others. Users will have to get used to mobile payments, so retailers will offer more mobile coupons, discounts, rewards, loyalty points and other incentives.

MOBILE COMMERCE WILL MOVE DOWN THE FUNNEL

Mobile platforms are currently seen as more of a source of information and sales encouragement, with mobile transactions making up only a tiny portion of overall sales. eMarketer estimates that only 1.6% of total retail sales in the US will have occurred on smartphone in 2015.

That should change in 2016, because the biggest digital companies – Apple, Google,Microsoft, Facebook and Amazon – will simplify the transition from mobile shopping to mobile buying.

MILLENIALS AND CENTENNIALS WILL BE OK WITH RELEASING EVEN MORE DATA

As more connected devices come online, and since the overall connectivity between people and things increases, more people – especially younger ones – will give up increasingly more of their data to marketers and internet publishers.

In the third quarter of this year, as much as 78% of Facebook’s $4.3 billion in ad revenue came from mobile. In the same period, 727 million, out of a total 1.55 billion users, accessed Facebook only via mobile devices, which means that 47% of them never used Facebook on a desktop computer. During the same period in 2014, just 34% were mobile-only, says eMarketer.