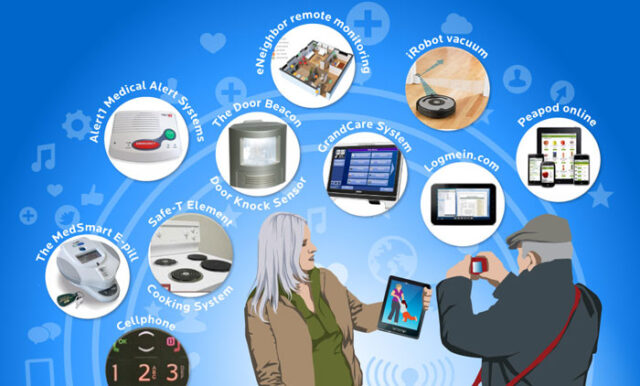 For older people, staying home can cause some health risks, but few tech gadgets and devices could make all difference, at the same time giving the members of family peace in their minds. There’s a misconception that older people are now generation that technology had forgotten. But, there’s plenty of technology designed especially for a much older generation. Going from Toyota robots that are carrying them around, hearing aids that are using the power of GPS to wireless sensors that are able to alert their closest ones if elders stop moving around the room or house. The question is, do older people really want to be accompanied by robots and other technology? There are some older people that are real experts when it comes to tech things, but there’s another half that finds it all a bit impenetrable. According to one study, 77% of older people would need help from someone to show the process of setting up something new.

Tablets for example, can be the perfect medium for the older generation. It can help them to stay in touch with their families and are much easier to learn, simpler to use than desktop PC. It’s easy to think that older people will find a device or gadget simple to use as you are doing it. But older people have more less sensitive nerves in finger, that means that their touch can be heavier than in the younger ones. Some of the tests performed, showed that if an older person has little tremor, the device could recognize touch as a swipe. Some of the older users are also known to have big levels of difficulty and even anxiety when they are introduced to a new type of technology. One of most pain and common things that affects older people is depression, but it’s been proven that those who are regularly using the internet have less chances of developing some kind of illness by 33 percent. The reduction was greater among those who are living alone. By using the internet they are reducing the feeling of loneliness and isolation which are probably 2 clinical triggers of depression.

For them, it’s all about finding information they need and being able to communicate. Many older people are using social media platforms as well. They have a positive attitude for that and around three quarters of the older generation is using it on a daily basis. They also more engage in video chats such as Skype calling, especially the ones living in care homes. Despite all the positive sides of technology for older generation, it can be hard to get them started first. The solution could be taking courses. There are specific programs that are specializing in giving technology lessons to older people.

For the younger generations who are willing to teach their older ones be it relatives or friends, simplicity and patience are crucial. If you grew up with technology, concepts of how it works is probably intuitive and familiar with you, but that doesn’t mean the same for older generations as for them it’s more foreign. Having positive experience will give older people more confidence to have their own experiments with technology without embarrassing or frustrating themselves.