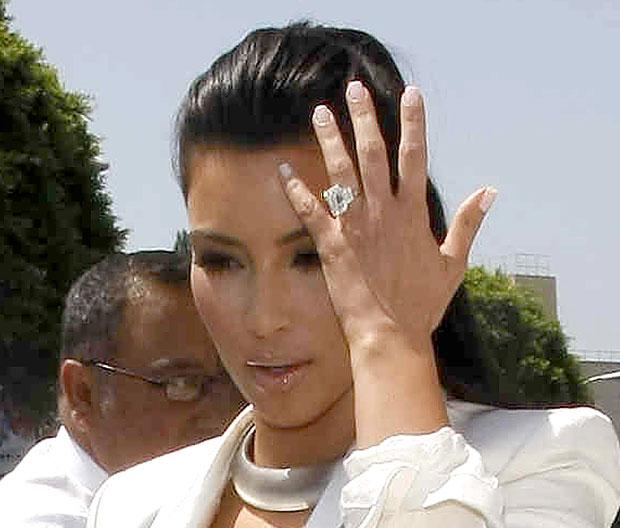 Their 72 day marriage ended in a bitter and prolonged divorce. And now Kris Humphries is apparently going to put the last memory of his brief marriage to Kim Kardashian behind him by auctioning off the 20-karat engagement ring he gave her.

RumorFix spoke to a rep for Christie’s, who confirmed that the 16.21 center karat ring with 1.80 karat side diamonds is indeed designed by Lorraine Schwartz. Those are the exact dimensions and designer of Kim’s ring. Due to client confidentiality they could not disclose who the seller is but confirmed it is “a gentleman.”

The ring is part of a lot entitled “Magnificent Jewels.”
The Lorraine Schwartz designed bauble was estimated to be worth upwards of $2 million at the time Kris popped the question, even though reports at the time said he got a sweetheart deal on the actual price paid.

The NBA star presented Kim with the ring on her reality show Keeping Up With The Kardashians. Their August 2011 wedding was featured in tow separate and highly viewed E!specials. And their divorce came a few months later.

After filing for divorce 32-year-old Kim wanted to keep the ring but Kris sought the jewel’s return as part of his fraud claim.