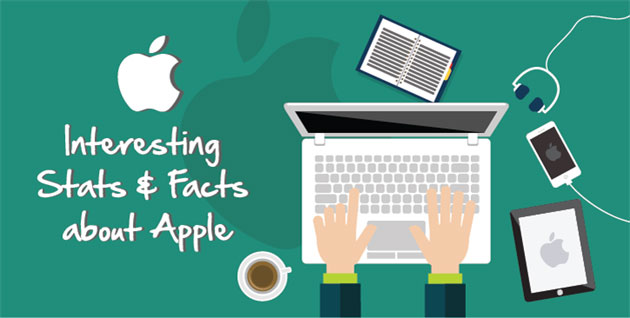 Even if you do not use their products, you’ve probably at least heard something about a giant from Cupertino and how he got to the current position of one of the largest technology companies in the world.

Admit it or not, Apple products are now one of the most recognizable brands in the world. Apple is a company with many years of history. About her co-founder Steve Jobs, were made movies, and there will probably be more. You can check your knowledge of Apple by using these infographic, which offers a wealth of interesting information and facts. Like, say, the data that Apple had three founders (along with Jobs and Steve Wozniak, there was also Ronald Wayne) or that they had at least ten devices that were quite substantial failures. We recently wrote about Apple fail brands, so you can check infographic here.

Did you know that Apple earns five thousand US dollars per second, or $ 300,000 per minute? Or how will you, if you smoke in the vicinity of Apple Computer, void your warranty? Or that last year were sold 326 iPhones per minute, or more than 470,000 per day?

Or that Apple Macintosh is named of apples McIntosh which was a favorite fruit of Jef Raskin. Macintosh was just a code name, Jobs wanted it (and even later) change in Bicycle, but Macintosh name is already stabilized and eventually it stayed. The first logo however was not now legendary bitten apple, but pictures of Isaac Newton sitting under a tree! This logo is used fortunately only a short time before he was replaced by recognizable apple.

Apple’s first computer had a price of $ 666, and some people have complained considering that Apple is satanic part!? Steve Wozniack later stated that he did not even think about the price, but that he wanted to price be just for one-third more than $500.

For more, see below: