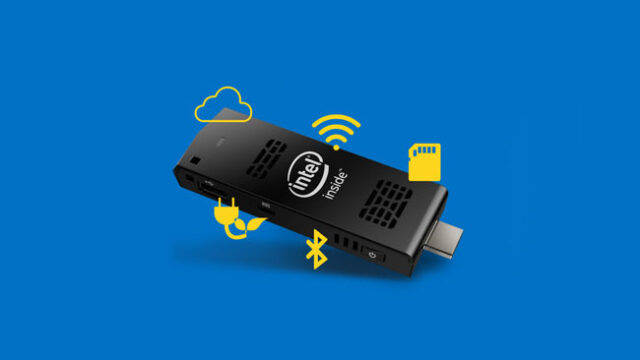 How does look the smallest PC in the world? It’s a little bigger than a USB stick, has four x86 cores and connects directly to the HDMI port of our screen. And it cost $ 150.

The smallest PC in the world – Intel Compute Stick 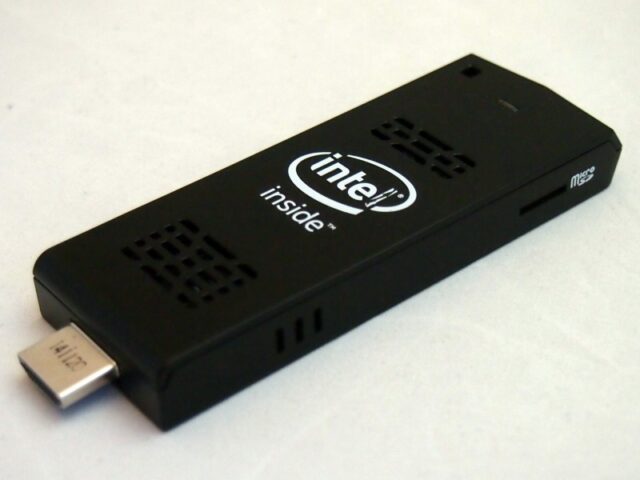 As announced from Intel in November 2014 that they are working on an extremely low-cost computer that will connect directly to the HDMI port of our monitor or TV with the Windows 8.1 operating system. The device is completed this year, and in April it went on sale.

The reactions of the first owners are divided. Some were delighted with the possibilities that this computer has. On the other hand people who are not happy they expected a better performance, more connectors, and a lower price.

It did not take much time to “shoot up” copies of this device. An example of this are Asus Chromebit, Mmele PCG-01 and Innovateck-T0264W PC.

PC on your palm 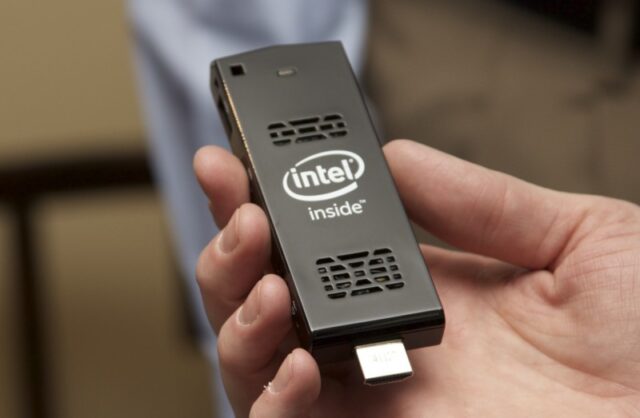 How big is the Intel Compute Stick, or should we say small? All components are mounted on the chassis 103 millimeters wide and 37 millimeters length. We could say that the size of the device is equal to the size of a chocolate bar.

The exterior part consists of one LED, which informs us whether the computer is running, a single USB 2.0 slot, miscroSD card slot, and micro USB port for power supply.

The device must have a power supply because the HDMI interface can not provide the energy needed to operate the computer. This means that we in the Intel Compute Stick to connect at least one cable. Care can connect the classic USB adapter.

There is also the option of merging into one of the free slots on the monitor or TV. If you have a TV or monitor powered USB port that remains active after switching off the screen, Compute Stick will behave just as it is connected to an external power adapter (will remain running). If this is not the case device will turn off when the screen turns off.

Intel Computer Stick runs Windows 8.1 operating system. It is a 32-bit version of Windows where the installation of 64-bit Windows is not possible.also can not install Windows 7 because they do not recognize the built-in flash memory.

So Computer Stick is not based on ARM architecture, but has a processor that can work with the x86 instruction set. It is a quad-processor whose clock speed is between 1.33 and 1.83 GHz with power consumption of 2.2 W. An associate him 2GB DDR 3 memory, where the RAM is soldered to the motherboard.

Memory storage is 32 GB, but it is important to note that one third of the space is occupied by windows. Fortunately there is a microSD card slot and that way it is possible to further expand the memory.

Inside this unit we have a WiFi card and Bluetooth module and a small fan that cools everything.
But there is a problem. Selected chip deals bad with multitasking.Using Bluetooth and Wi-Fi at the same time is almost impossible.

How then use the periphery? The best solution is to purchase wireless mouse and keyboard with a unique dungleom that we can put in the only available USB port.

This is not desktop PC!

The performance of Intel Compute Stick are acceptable, with one important thing – all forms of 3D gaming is absolutely impossible. The same applies to work in more demanding hardware applications, such as Photoshop, Lightroom, AutoCAD, Solid Works and others.

This is not a computer, which should replace your primary home PC, but on him to be considered as a miniature, portable HTPC or thin clients for classrooms.
when we consider that the price of $ 150 device can be said that the ratio of prices and gain is completely realistic.

The truth is that the device requires additional investment, at least for wireless peripherals.
more and more companies offering surprising agile computer, but no one has yet dared computer with Windows 8 to reduce the size of a USB stick.

Below you can check infographic with additional information about Intel Compute Stick :