Home Daily Infographics Infographic: Who made the world’s most popular applications? 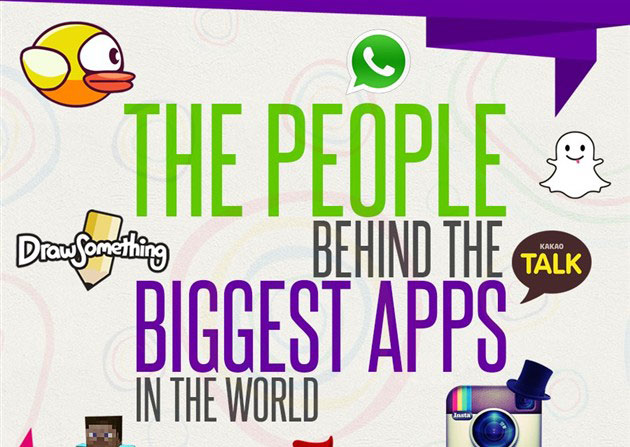 Applications are used for anything and everything, from communication and playing to the monitoring exercise and perform daily tasks. Most successful is owned by larger companies, but often it began with an individual who had the idea.

Who are these people? Where are they? What kind of apps they do? Are they planning to enrich or it happened accidentally?

Internet has allowed us to with a little effort and a lot of good promotions become famous almost through the night. Such thing was difficult to achieve before because people couldn’t reach out to the entire world population in a very short time. Today is definitely a different thing because every word written on the Internet can be seen by almost every person on earth. The Internet has created a global village and it is a fact of which can not be, and must not run away. Indeed, why should we flee from the Internet when it offers us so many opportunities for success and a breakthrough in the global market.

Market applications is currently one of the most fruitful areas for a fast buck. Such a thing is a dream of many individuals who hope to just their application become the number one and that is downloaded by millions of people. When such a thing happens, the owners of applications in a very short time become millionaires and whose newly formed company grow in value to the cash figures on which we can only dream of. For example the formation of the super popular applications are many, and it is clear that behind all it can stand mega corporations (eg Facebook) or completely unknown individuals (eg FlappyBirds).