Home Daily Infographics How To Use Tumblr For Marketing 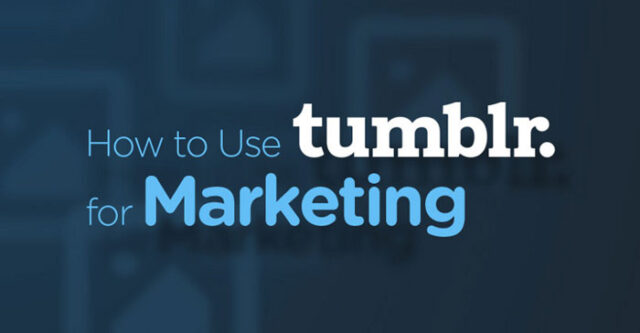 I suppose you’ve heard about Tumblr platform already, unless you’ve been sleeping under rock. If you haven’t done it by now, you should seriously consider adding it to your marketing strategy. The truth is that there are many social media pages so it’s easy to overlook ones that can be important to you and your business. Tumblr is one of platforms that has big potential for marketing and SEO.

So why should you care about Tumblr at all?

First of all, there are 300 million unique visitors each month, according to Yahoo. It is also 28th site when it comes to traffic and 50% of users are being under age of 25. More then half of visitors are females and there are over 130 million blogs there, which makes Tumblr biggest platform for hosting blogs. You can see that these stats are really massive.

Big and world popular brands have noticed this too. For instance, Yahoo had purchased Tumblr for massive $1.1 billion dollars and this is the second largest purchase coming from Internet company since Google has bought YouTube. But, I still haven’t explained what it actually is. Well, it’s somehow hard to perfectly describe it because it’s combining functionalities of few different sites. If I had to explain I’ll say it’s like a cross between Facebook and blogging platform. It has features like sharing, liking and following too.

What kind of content is the best on Tumblr?

Like on any other social platforms, Tumblr is visual medium which means pictures are doing better then text. There are 4 types of content that will perform very good there. First of specific example are memes. They are probably favorite content for promotion on social platforms. They are almost like a viral content that is shared through the social channels. You can try to find many funny memes online but still the best idea is to create your own for your niche.

Pictures on Facebook and Pinterest are very popular, and the same goes for Tumblr. Creating amazing photos is not an easy job at all, but it’s also not impossible if you have a good camera equipment. Illustrations and drawings are performing great on Tumblr too. If you don’t have talent for creating stunning graphics go to sites like Upwork, Fiverr, 99 designs or Deviant Art where you can get custom made artwork delivered specially for your niche. Another content that’s really easy to use are quotes. They are simple for creating even if you don’t have skills for other content. Find some inspirational quotes and mix it up with some attractive picture and you can have piece that can go viral even on other social media platforms. Tumblr also allows you to use animated GIF’s when you post. GIF’s are very popular among users of Tumblr.

Tumblr is often ignored by marketers online but it’s one of biggest blogging platforms in the world. As long as you try to include some of these methods I’ve said in this text you will do good. Doesn’t matter if you have other social platform on your schedule or if you don’t have extra time, you have to be on Tumblr, it’s simple as that.