Home Daily Infographics How To Pick Your 1st Programming Language? 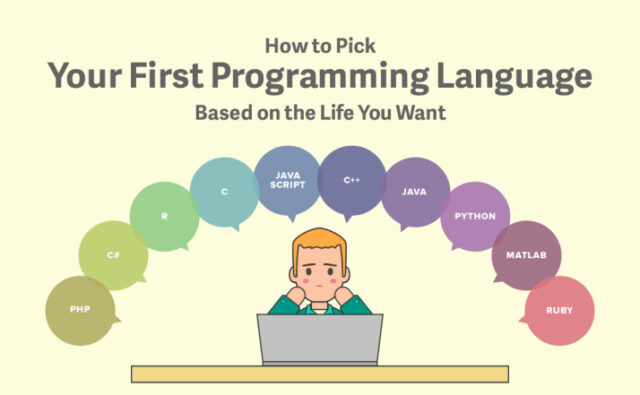 How To Pick Your 1st Programming Language?

There are at least three types of programming languages:

It is rare for first-time coders to pick a programming language the way you might pick a video game from a wall of many video games. Instead, coders learn their first language in several possible ways:

Choices for Your First Programming Language

Beyond the issue of how to migrate from learning your first language to proficiency in that language, there are many languages to consider when you choose your first programming language. If you have a choice of what language to learn first, and you don’t have a desire to mod your favorite game or reverse engineer a neat effect you saw on a web page, these languages are worth a look:

With two or three possible languages in mind, research what kinds of support is available online. Research how the language is used in the real world. Research where you can get help learning each language. For example, knowing someone who can help answer questions when you get stuck might work best if you want to learn on your own or take online classes. All programming languages have nuances learned over time. They’re passed on person to person.

If you cannot find a programmer to help from time to time, also look into local Meetup groups and check them out. While coding is a solitary activity, meetups and having someone to answer questions are very important to your development as a programmer.  This infographic helps you figure out to how pick your 1st programming language.