Home Daily Infographics How the Internet Changes Your Brain 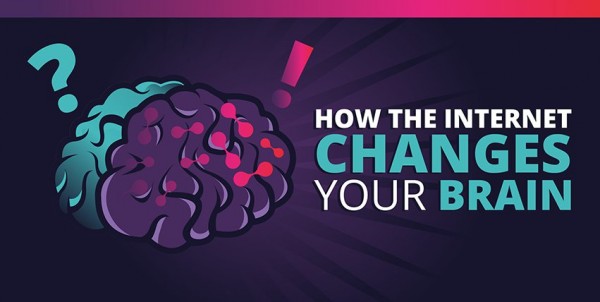 We send e-mails. We Tweet. We use Facebook. We Google many things. It seems sometimes that computers have taken control over our everyday lives. Just from how we buy things to how we find friends. And then we ask each other: “How the internet changes your Brain?”

To quote Nicholas Carr: “The Internet is an interruption system. It seizes our attention only to scramble it.”

Is it possible that online world helps us to become better multi-taskers, all while we still maintain critical thinking skills?

How the Internet Changes Your Brain

When it comes to technology, what behavior are we practicing? How does that affect our minds? Let’s see smome strange facts how it really goes.

The Internet may give you an addict’s brain

MRI research has shown that the brains of Internet users who have trouble controlling their craving to be constantly plugged-in exhibit changes similar to those seen in people addicted to drugs and alcohol. A 2011 study showed that unplugging from technology for one day gave some users physical and mental withdrawal symptoms.

Majority of people we see with serious Internet addiction are gamers. They spend long hours in roles in various games that cause them to disregard their obligations.

You may feel more lonely and jealous

Social media may make it easier to connect with others, but recent research suggests that constantly viewing images of others’ vacation photos, personal achievements, etc. can trigger strong feelings of envy, even sadness. Researchers have even described the phenomenon as “Facebook depression.”

It’s suprising to see how many people have a negative experience from Facebook with envy leaving them feeling lonely, frustrated or angry.

Internet use may raise suicide risk in certain teens

Researchers at the University of Oxford in England concluded that online time is linked to an increased risk of suicide and self-harm among vulnerable adolescents.

“We are not saying that all young people who go on the Internet increase their risk of suicide or self-harm,” one of the researchers, Dr. Paul Montgomery, professor of psycho-social intervention at the university, said in a written statement. ”

They are talking about vulnerable young people who are going online specifically to find out more about harming themselves or because they are considering suicide already. The question is whether the online content triggers a response so that they self-harm or take their own lives. There could be a link between it.

Memory problems may be more likely

Even a rather typical session of social media browsing can lead to information overload and make it harder to file away information in your memory. The brains of people who are constantly bombarded with several streams of electronic information may find it difficult to pay attention and switch from one job to another efficiently.

When they’re in situations where there are multiple sources of information coming from the external world or emerging out of memory, they’re not able to filter out what’s not relevant to their current goal. That failure to filter means they’re slowed down by that irrelevant information.

But on the bright side internet can actually boost brain function

Our brains use information stored in the long-term memory to facilitate critical thinking. We need these unique memories to understand and interact with the world around us. If we rely on Google to store our knowledge, we may be losing an important part of our identity. Infographics bellow shows how the internet changes your brain. Check it out and see if you have already been affected.