Home Daily Infographics How Much Money Do Youtubers Make? 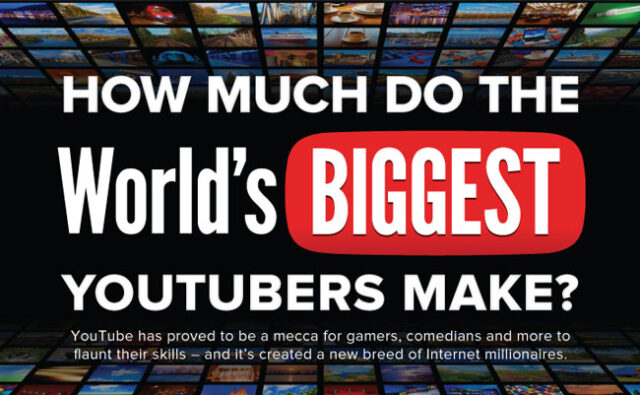 The digital age has led to the emergence of digital stars. A special role in this story has a video service YouTube, but how much earn the most famous personalities is not clear. Service WhoIsHostingThis created the infographic and served a multitude of sources in order to bring the assessment. Unsurprisingly, few YouTubers are making millions.

Social media have brought a real revolution in terms of how exactly someone becomes ‘well-known and famous’. ‘Rather than it is available only to politicians, billionaires or popular actors, the fame is now possible for everyone – even for their pets, “says WhoIsHostingThis, adding that instead of the usual formula where money leads to a position among the stars, in recent times things are going in reverse direction – particularly when it comes to YouTube.

According to estimates Youtuber Felix Kjellberg, known as PewDiePie earns the most. His playing, yelling, swearing and generally wacky behavior adores more than 35 million subscribers, and he has achieved more than 7.3 billion views. Just enough for earn approximately of $1.4 million. WhoIsHostingThis nevertheless notes that the assessment should be lowered somewhat in order to be as realistic as possible, and their infographic shows that: