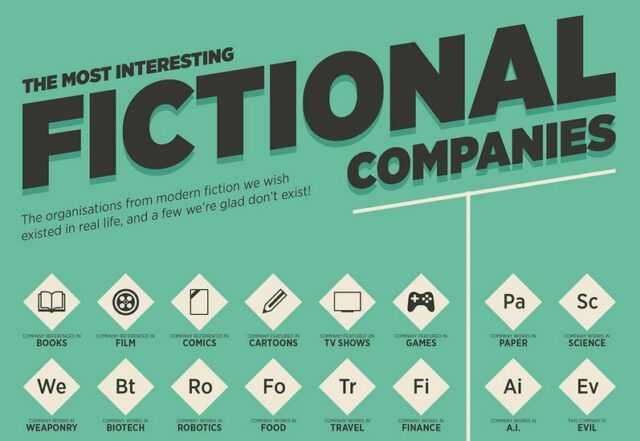 There are many big companies in our world, but honestly they can’t compare with the ones that are made up and presented in universes that are fictional. In dreamworld anything is possible so in movies and TV shows we see many companies that can do much more then just make money. They can either destroy the entire planet, innovate beyond normal possibilities or even create total chaos sometimes. Some of them that I will present here are both small and big, good and purely evil.

First on my list of most interesting fictional companies is Burns Industries. This company comes from The Simpsons universe and the owner is Charles Montgomery Burns which is also Springfields’ richest man. It’s pretty obvious and clear that nuclear plant is his primary business but he also owns casino, opera house, state prison, and many stadiums for sport.

Much like real organisations CIA and FBI, there are also Men In black. They are monitoring and approving all alien life here on Earth. They are operating in secret, general population is not really aware of them as they are more like unknown.

Another famous company is Monsters Incorporation and like you probably know there is entire movie about it. I guess that you watched the movie but if you’re not familiar with it – Monsters have their own universities and industry and their primary source of power are screams from people especially from small human kids.

If you watched the Terminator franchise you heard of Skynet which eventually turned machines against people. Well, Skynet was accidentally released by Cyberdyne systems which are developing much advanced technology used by US defense apartment.

Who didn’t watch Breaking Bad? Los Pollos Hermanos was fast food place owned by Gustavo Fring. Sometimes this place was used for money laundering but the legal part of business also had success.

The Umbrella Corporation. Yes you know that one, it’s from famous Resident Evil franchise of games and movies. They are business that is producing everything from pharmaceuticals, biological warfare, military hardware of cosmetics. Sadly, they slipped up with very dangerous virus called T-virus, which eventually turns humans into zombies and this is how Resident Evil started.

One of my favorite fictional companies is Planet Express Incorporation because I love Futurama universe. They are most of the time just simple company for delivering stuff. But when they’re not just serving for delivery they are much more. The owner of that company is professor Hubert J. Farnsworth and what is he doing there are projects of scientific researches.  The primary vehicle of transport is space ship, and it looks like an awesome place to work.

So there you have it, which one is your favorite fictional company and for what reason?