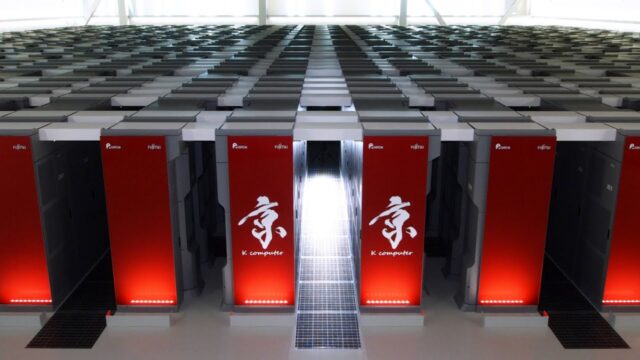 Do you ever wonder what are the most powerful and fastest supercomputers in the world? I sure do. I think it’s really intriguing to see mightiest computer machines. I’ve put a list of 10 supercomputers so lets go through it and check out more details.

On the 10th place its computer from United States called The Vulcan. It’s often referred as mysterious supercomputer of the U.S. government. Vulcan is sometimes open to the general public, so people are able to rent out its processor cycles when doing business research. Vulcan is performing with the speed of 4.29 Pflop/s.

On 9th place, its the only computer that is based in Europe, precisely in Germany – Forschungszentrum Juelich. The name of this supercomputer is Juqueen and it’s based in the older architecture from IBM called BlueGene. Juqueen basically serves for simulations of a scientific nature in areas such as climate, energy research and biology. The speed of this supercomputer is 5.01 Pflop/s.

On 8th place another supercomputer comes from United States. It’s called Stampede and is based on Dell PowerEdge C8220. The system itself is linked with many powerful desktop PC’s. It’s positioned at Advanced Computing Center in Texas and its speed is 5.17 Pflop/s. It is also said that Stampede is the strongest academic supercomputer in America. Stampede is now being used for researching of new biofuel types, studying for climate change and earthquake and much more.

On the 7th place, supercomputer comes from Saudi Arabia. It’s also first super PC that’s from Middle East, that is inside top 10. The name of this computer is Shaheen II. The exact location of Shaheen II is at the King Abdullah Technology and Science University. The meaning of Shaheen on Arabic is peregrine falcon and the role of this supercomputer is support for academic and scientific research. Shaheen is performing at the speed of 5.536 Pflop/s using almost 200,000 Intel Xeon cores.

On 6th place in Switzerland comes supercomputer called The Piz Daint which is probably the most powerful PC in entire Europe. It is installed in National Supercomputing Centre in Lugano. This supercomputer was named for Alpine peak and its purpose is computing for international and national projects. Piz Daint is operating on the power of 6.27 Pflop/s.

On the fifth place comes third supercomputer from U.S. This one is called Mira and it’s also built around architecture of BlueGene. Mira is also one of if not the oldest computer on my top 10 list. Mira is working with the power of 8.59 Pflop/s using preciesly 76,432 cores. This supercomputer is on the third place in America when it comes to how powerful it is. It’s used by Department of Energy outside Chicago at Argonne National Laboratory.

4th place is taken up by K Computer coming from Japan. It’s produced by Fujitsu company at the AICS RIKEN in Kobe. K computer is probably the longest member of top 10 lists for a long time. Its primary usage is for pharmacological researching, simulations of weather forecasting, space science and much more.

3rd place is occupied by yet another supercomputer from United States. The name of this one is Sequoia. It’s located at Lawrence Livermore National Laboratory in California. This supercomputer is also operating on BlueGene framework from IBM. It’s used for astronomy, advances in climate area and areas of energy application.

At 2nd place comes Titan from United States. Titan evolved from Jaguar supercomputer which was upgraded back in 2012 for the goal of becoming most powerful PC. It was until Titan supercomputer took over it. Titan is used for fuel combustion, simulations of chemistry and meteorology as well as researches in the field of material science. It’s very powerful, performing at the power of 17.59 Pfop/s. It is placed in Oak Ridge National Laboratory.

And finally, we came to first place. Most powerful supercomputer in the world comes from China. The name is Tiahne-2 or Milky Way-2. It’s still a champion straight for fifth time. Tianhe-2 is performing almost as double as Titan with amazing computing power of 33.86 petaflops. The system itself has 3,120,000 cores. It’s basically used for whatever reasons China government needs it and wants to do with it. So there you have it, those are top 10 most powerful supercomputers in the world. I hope you enjoyed the information.