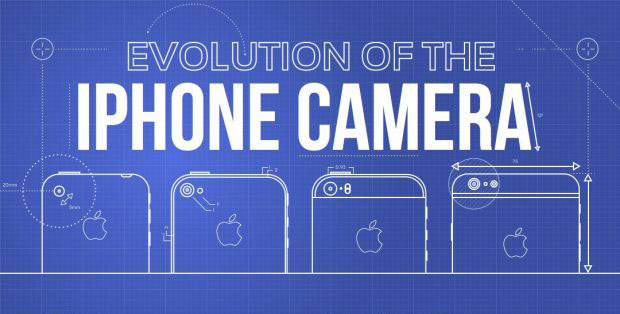 The first iPhone saw light of the day eight years ago. Since then, the iPhone has greatly evolved. iPhone certainly has a great camera, but with every new model is cominga new camera improvement.  Many resent that since the model 4S has been no upgrade of camres resolution which stayed on the 8 MP. Of course, it’s not everything in megapixels, but sensor which is till more important. However, the new Apple iPhone model 6s / + has a camera of 12 MP.

The latest generation is not only much thinner and lighter, but also contains options that the first generation could only dream of. Then the iPhone came equipped with a 2 megapixel camera and there was no ability to record video. iPhone 6s now has an 12 megapixel camera, the ability to record video and some other tools to help you better photographing and recording.

Apple is known for being competing with the Android manufacturers, so in every new model they throwing more RAM, newer processors with larger clock speed and the like. The same situation is with the camera. Apple kept the size of the sensor and the same optics, while the image resolution experienced a jump to 12 MP. As far as video recording, iPhone should be able to record 2160p video now.

iPhones have come a long way over the years. They keep getting better every year though. This infographic below covers the evolution of the iPhone camera over the years: