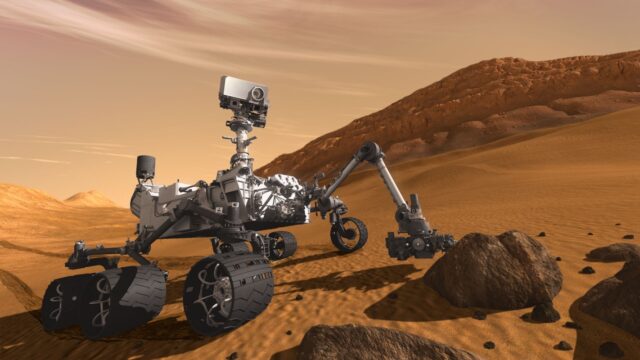 Rovers (or sometimes planetary rovers) are space exploration vehicles designed to move across the surface of a planet or other celestial body. Some rovers have been designed to transport members of a human spaceflight crew; others have been partially or fully autonomous robots. Rovers usually arrive at the planetary surface on a lander-style spacecraft.

Rovers have several advantages over stationary landers: they examine more territory and they can be directed to interesting features. If they are solar-powered, they can place themselves in sunny positions to weather winter months. They can also advance the knowledge of how to perform very remote robotic vehicle control which is necessarily semi-autonomous due to the finite speed of light.

Their advantages over orbiting spacecraft are that they can make observations to a microscopic level and can conduct physical experimentation. Disadvantages of rovers compared to orbiters are the higher chance of failure, due to landing and other risks, and that they are limited to a small area around a landing site which itself is only approximately anticipated.

Space rovers arrive on spacecraft and are used in conditions very distinct from those on the Earth, which makes some demands on their design. Some of the main features of rovers are:

Rovers are usually packed for placing in a spacecraft, because it has limited capacity, and have to be deployed. They are also attached to a spacecraft, so devices for removing these connections are installed.

Rovers which land on celestial bodies far from the Earth, such as the Mars Exploration Rovers, cannot be remotely controlled in real-time since the speed at which radio signals travel is far too slow for real time or near-real time communication. Main reason is because sending a signal from Mars to Earth takes between 3 and 21 minutes.

These rovers are thus capable of operating autonomously with little assistance from ground control as far as navigation and data acquisition are concerned, although they still require human input for identifying promising targets in the distance to which to drive, and determining how to position itself to maximize solar energy.

Giving a rover some rudimentary visual identification capabilities to make simple distinctions can allow engineers to speed up the reconnaissance.

Space exploration is very exciting. Scientists are relying on rovers to find out about the planets in our Solar System. This infographic bring some interesting facts about space rovers.