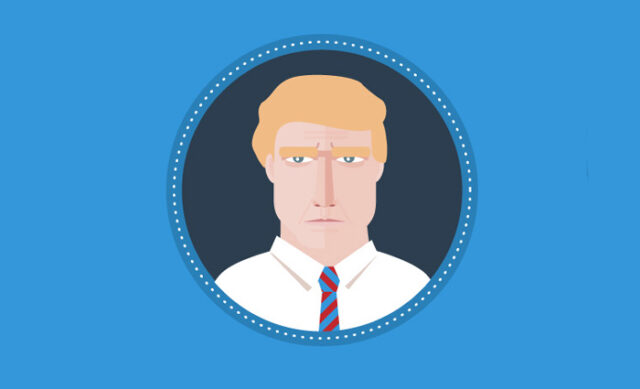 Let’s remember how we came to the fact that this 69-year-old became world “sensation”.

Donald Trump was born on June 14, 1946 in Queens (New York). His mother was an immigrant from Scotland, and fathers parents are migrants from Germany.

Trump went in a private school, where his father was a member of the board of trustees. He was very restless child, so his father dispatched him to military school. Later he enrolled in Fordham University in the Bronx, but later switched to Wharton, where he graduated. Donald avoided Vietnam thanks to the university.

He began his career in his father’s company for property renting, and the first project was to revitalize the complex Swifton Village. Father bought the building for $ 5.7 million, invested 500,000 and sold it for 6.75 million dollars. Donald Trump then got involved in Manhattan, and already in 1973 he won the first federal prosecution.

This was followed by the purchase of the hotel and casino, but Taj Mahal Casino brought him only the accumulation of debts and in 1991 Trump declared bankruptcy. He sold his shares in the casino in exchange for a reduction in interest rates, sold his air route, mega-yacht, and then, in the late 90’s began again financially strengthen and according to Forbes his wealth estimated at four billion dollars.

A number of investigative journalists are brought him in connection with the Italian and Russian mafia. There are also allegations that the Trump Tower and Trump Plaza were built with money that he “got from” mafia family Salerno and Gambino.

Let us add that he also has some activities in the following companies: Bank of America, Intel, Johnson & Johnson, Procter & Gamble and – Facebook. Trump also owns the licenses for the various contests, and at one time was the financial advisor to Mike Tyson. His name is linked to the numerous golf courses around the world.

Trump in the last two decades, funds American politicians, and he gave the money to Democrats and Republicans. In the last elections, he gave support to Mitt Romney. What is interesting, Trump is many years trying to deny US citizenship of Barack Obama, and he has formed a team of private investigators who hopes to prove that Obama was not born in the United States.

His pursuit of the Oval Office and the White House began back in 1988, he was not able to fight for the presidential nomination for many years. Donald Trump took a chance in the last elections also, but soon gave up so his move was called “the most rapid progress and decline in the history of American presidential politics.”

His first moment of political fame was in June 16, 2015, when from Trump Tower announced that he is one of the Republican candidates for the US presidency. From that moment, Trump visited states by collecting points for the nomination, and, if you believe the figures, he does well because he has become the leading Republican candidate for President of the United States.

In addition, he wrote several books like: Crippled America: How to Make America Great Again, Trump: The Art of the Deal and Think Like a Champion: An Informal Education in Business and Life…

What will be the fate of tycoon in politics, we will see, but it is interesting that he managed to get Republicans angry by saying that he would not be averse to stand without the party in the elections.