Home Daily Infographics Display advertising 101 – the past, present and future

Do you know what display advertising is? What is it used for and what are the good and bad effects of it? And do you want to know how it all started? If you want to learn all of that just keep with reading this article because all of that and more will be explained to you.

But today we have internet and online display advertising became very popular in these days. A most popular form of display advertising on internet are “banners”. Banners are images or some graphics that are placed on some webpage as an advertisements. A classic banner has a size of 468×60 pixels and it basically has all the things I mentioned at the beginning, image or picture with text and logo. Sometimes those banners can be animated and include some specific action when clicked on. There are also bigger banners where companies can include even more information but those cost more, depending on the size, position on website and traffic of that site.

The most important part is to define your customers and then target the advertisements to them. If you offer some Apple application to people with Android phones you probably won’t get a good responses. You have to learn who your customers are and, if needed, what is their location and behavior. When you define all of that it will be possible to target wanted audience and increase effectiveness of your display advertising campaign and your investment will be good.

Even if you target your audience and place your banner on some page with lots of views it won’t be worth it if you don’t create an attractive banner. If you can’t create it yourself then it is always better to pay some professional to do it. You have to create it with clean and attractive design and it is always good to use image or some graphic while will represent your business and give people some information about what it does and what the name of it is. Another good thing is to place the most important parts of ad to bold colors or attractive fonts to make it stand out.  When you banner is eye-catching your message will stand out and more people will see it and click on it.

The most important of your advertisement is CTA (call to action). CTA is the part of ad that tells the people what to do. Imagine that some visitor sees your add, gets interested to it but doesn’t want to go to your page because of a bad CTA, that would mean losing a potential customer. Always attract visitors to click something with offering something to them. That can be anything, from free coupon to e-book. Just ask visitors to do something to get something and it should work.

When you include some clickable CTA it is important to have a landing page where visitors will go after that click. But not just any landing page, it must be optimized. There are really a lot of ways to optimize your landing page and if you know what you are doing then it will be easy. But if you don’t know what to do it is important to learn it before you start doing anything. If you already succeed with targeting perfect audience, attracting it to your banner and made them click something it would be shame to lose potential customer just because of a badly optimized landing page. So, optimize it perfectly and make use of visitors that come to it. You can find more details about optimizing it in my article – Keys for optimizing landing page.

And the last element of a perfect display advertisement campaign is to track every activity that happens with your ad. It is important to track the difference between impressions and clicks on your banner because on that way you can define if there is something wrong with it. And change some stuff to see what things work better. Tracking the activities can give you better insight to the behavior of your customers and help you to increase effectiveness of your campaign.

So, let’s start with pros and why you should start with display advertising.

If you are interested on a short story about the whole evolution of display advertising then you are on the right place. Keep reading to find out how people advertised before and how all of that changed. 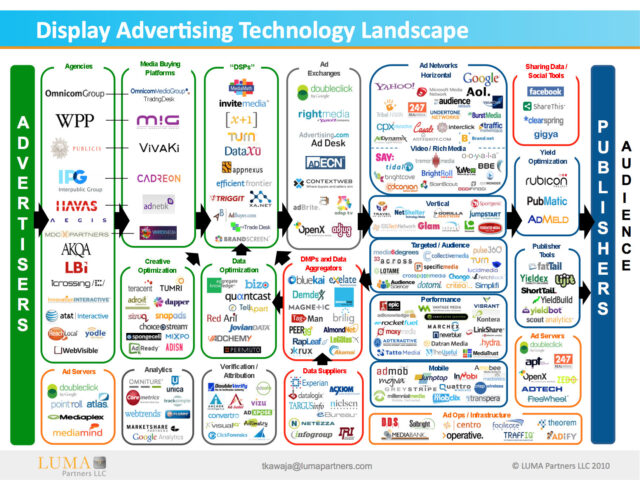 There were a lot of problems at that time because more and more Ad Networks were launched so advertisers sometimes purchased the same audience more times. Because of that need for better efficiency an Ad Exchange and RTB (Real-Time Bidding) were launched.

Some things that can be described as trends today will probably become a standard in the future. It doesn’t matter if you are offering your inventory for display advertising or you want to buy a place for some banner to advertise product you have to learn and prepare for future. In the future we can expect more and more specialized display advertising networks, like DisplayFuel product. DisplayFuel is not a mass-appeal service for advertisements like Bing or Google, DisplayFuel is a service that targets a specific part of industry and that is software advertising industry.

Display ads of the future will probably be focused on customers and will be highly optimized. But we can’t be completely sure what the future will look like because there are many factors which affect that. One of that factors are new technologies. With new technologies a more advertising features will come, we could see display ads become more like video ads, interactive ads and similar. Another thing that should influence the future of display advertising are the needs of a specific individual and the detailed view to psychology of customers.