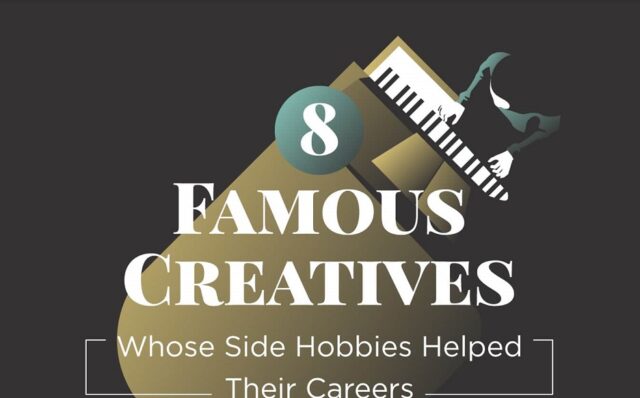 Taking time away from your daily work to focus on a hobby or side gig can help remove creative blocks and inspire big ideas. One study published in the Journal of Occupational and Organizational Psychology concluded that people who regularly engage in creative hobbies outside of work feel more relaxed and in control in their off-hours.

The infographic below highlights 8 famous creatives whose side hobbies significantly impacted their careers.

Emily Dickinson, one of the greatest poets in American history, had a passion for baking. She used the kitchen as a source of inspiration where she would write lines of poetry on the back of recipes while baking.

Ayn Rand was a Russian-American writer and philosopher. The avid writer was a passionate philatelist. She would spend time with her stamps as a “brain-restorer” when feeling a creative block.

The forty-third President of the United States, Bush had taken up painting in 2012 and the hobby has become something of a career. He even took lessons from prominent instructors to further his artistic abilities.

Madeleine L’Engle is best known for her young adult fiction and 1962 novel A Wrinkle in Time; however, the author was also a skilled pianist.

Throughout the second half of his career, eccentric Surrealist painter, Salvador Dalí, turned to illustrating. He illustrated many respectable books including Don Quixote, Macbeth, The Divine Comedy, Alice in Wonderland, and even copies of the Bible.

In the autumn of 1962, only four months before her death in February 1963, Sylvia Plath published a series of five poems about bees after taking up beekeeping as a hobby.

Victor Hugo produced over 4,000 drawings and experimented with different mediums throughout his lifetime, many of which were praised by leading artists of his era. Unfortunately, afraid his drawings would overshadow his literary accomplishments, he only shared his artwork privately.

From childhood, American entrepreneur Walt Disney was an avid train enthusiast. Disney’s passion for model trains served as inspiration for the attractions that appear within Walt Disney Resorts.