Home Daily Infographics Your Brain on BEER vs. COFFEE – 2020 Study 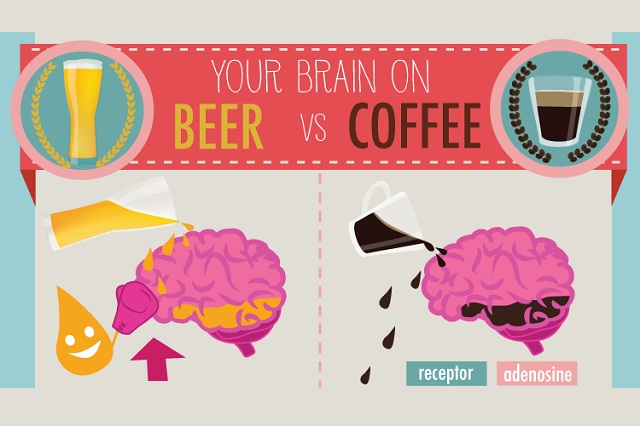 Drinking beer and coffee is as normal as snacking. While snacking seems to be known to be the infamous cause of putting on weight, not many have realized the significantly different effects of the two popular drinks on our human brains.

What is well known about coffee is that it helps us get rid of drowsiness. When workload or academic assignments are piling up, we drink coffee to be able to stay alert and focused for longer period of time. Well, does the drink actually possess such magical power as it is believed? To find out the truth behind the popular belief, what we need to highlight is that coffee contains caffeine and the substance can bind with adenosine, a part of brain which calls for sleepiness when it binds with its receptor. Simply put, caffeine makes the binding of adenosine and the receptor less likely, if not impossible. Thus, five minutes right after the first sip of coffee, we find ourselves more energized and focused.

Beer, on the other hand, is known to be the kind of drinks consumed while watching TV or having light conversations with friends, or in other stress free atmosphere. Lucky for us, such settings go along with the scientific explanation of beer effects. It starts with the alcohol composition in beer. The alcohol we consume deals with the cerebral cortex, a part of the brain that manages consciousness. When we are in conscious state, we tend to have lots of thoughts going on in our brains. So many things to think about. Thankfully, the presence of the alcohol in the celebral cortex helps us be free from some insignificant thoughts. No wonder, people tend to be seen as more relaxed when drinking beer. Further scientific investigation has even pointed out the fact that as our brain gains more freedom and less worries about some unimportant matters, the brain can then make deeper connections, which means more creativity for us. Scientific data have even specifically mentioned that creative ideas pour in when our blood alcohol hits 0.07, the amount that can be reached after approximately two drinks.

In short, it can be concluded that coffee is a good company in situations where focus plays a major role, while beer is a ‘good relaxing friend’ that can fish out the creativity in you.

Despite the drinks’ obvious benefits on our brain functions, consumption of either over the moderate limit will do more harm than good. In fact, too much alcohol results in less memory capacity as well as difficulty to focus. Caffeine (although less noticeably) harms our body tolerance of the substance, which can constantly create higher demand for coffee in order to get more focus. This, in the end, can result in addiction and uncontrollable coffee intake. Therefore, keeping things in moderation is key to enjoying the perks of both drinks. What may work is to drink beer when seeking brilliant (brand new) ideas and drink coffee while there is the dire need to keep focused to execute the idea(s).

Ryoko Iwata from I Love Coffee created this handy infographic to help us decipher when to consume which beverage for optimal creativity and productivity. Have a look at the full infographic below.