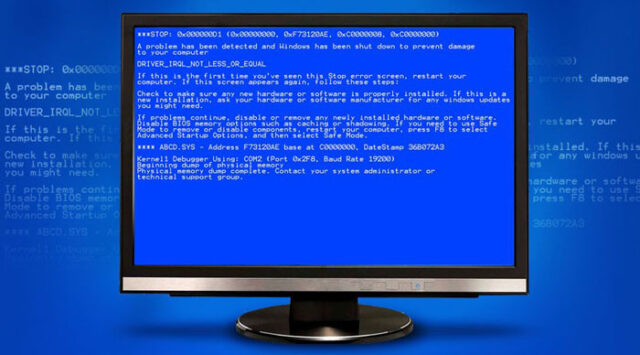 Seeing blue screen of death or BSOD is very unpleasant feeling. If blue screen appears on your Windows it means only one thing- probably critical error from which Windows can’t recover back, demanding reboot and even resulting in loosing data. This type of error is worst thing that PC can experience, unlike crashing of single apps which can’t bring the entire system down. Blue Screen Of Death usually occurs of faulty hardware. It is generally caused by that or even driver software for hardware. Standard versions of software should not cause that and if the crash happens it will not wipe out OS with that. Sometimes, if you are lucky enough the problem will resolve by itself with only automatic reboot and you will not need to worry about that anymore but, typically what usually happens is that even after rebooting the system you are presented with the same screen over and over. Even in those situations know that it’s not all lost. There are ways you could fix this and I want to talk about some of them here.

Most important question you can ask yourself in order to fix this problem is, what you just did last hour or few mins ago? Maybe you updated new driver, or installed a piece of hardware or new program. There’s a very high chance some of those changes are causing the blue screen to appear. In order to start, you can undo all the changes you made and test if you will experience that error again. Depending on what was that you did you can use system restore for rolling back system’s recent changes. You can also try to roll back the last update for driver. Blue screen can also occur when data is corrupted or if there is not enough space on your hard drive for Windows. It’s important to note that even Microsoft is suggesting to have at least 100 megabytes of free space. What I’d like to advise you is to keep at least 15% of total capacity free from your main partition used for Windows OS.

It’s crucial that you don’t leave out scanning your PC for viruses. Some of them can cause BSOD, especially the ones that can infect boot sector or master boot record. When you’re scanning keep an eye of Antivirus version as well as if it’s completely updated. Microsoft is known for releasing service packs and patches for Windows on a regular basis, so use that in your advantage and perform download of all available updates from Microsoft that could potentially solve BSOD problem. Even more important is to update drivers for your hardware. Most of Blue Screens of Death are related to hardware errors. If that doesn’t help try to go to your device manager and roll back any hardware settings to default. If you messed with settings in BIOS return them to deafult levels. Missing configured or overclocked BIOS can not only cause BSOD but many other issues.

Hardware that is not connected and firmly in its place can also be the cause. So check out for all the cards, internal cables and other components to make sure they are connected properly. In some occasions if your BIOS is outdated it can also invoke some incompatibilities, so update your BIOS. If you still can’t fix problem you can bring your PC to the nearest PC store so they can try to fix it or maybe even change some part that’s hardware related.