Angular 4 is the latest update for the Angular framework. I will not go without slight introduction for those of you who do not know yet, what Angular 4 is and its hidden enriched powers for the mobile and web development world.

Angular 4 is framework aiming mobile and web applications. This framework is actually classed as a new framework comparing to its main competitors such as React and Ember .

The differences between Angular 4 and AngularJS

It was the year 2016 when Angular first appeared in the world of web development. Angular was developed and still maintained by Angular team at Google. AngularJS and Angular 4 are different but very much similar frameworks. Angular framework is the ground- up rewritten framework of AngularJS. Just to bring some light for those of you who do not understand the major differences between two, here are some examples:

There are some differences between Angular 4 and AngularJS. However, if you are curious person like me and want to find out a bit more about the major differences, please read the full list here.

Since its origin, Angular 4 has attained a series of milestones with each update. These transformations have changed the face of Web Development altogether. In the current date, Angular 4 has  customized features, that meet the requirements of the modern world currently dominated by the mobile users.

A lot has changed for the past years when it comes to web development. This changes do not come alone only for the user interface. Today in the fast growing mobile market, everything needs to be fast and super user friendly with intuitive design. Of course all of this would not be possible to achieve with the old HTML and JavaScript alone.

Achieving the maximum speed and performance is not only crucial when it comes to SEO. It is the whole thing starting from on server-side, web browsers and devices, end users.

Angular 4 is incredible when it comes to template. This makes the development process really easy and convenient. The templates allowing you to edit and extend the templates with your own components in any time. This gives you more time to focus on building better apps rather making something work.

The point is back in the days all developers struggled to make things work wasting valuable time and resources getting only one component work. Angular 4 has solved this major issue for many developers to come. 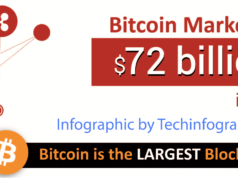 Bitcoin Price and the Real Potential into the Cryptocurrency – Infographic Edition