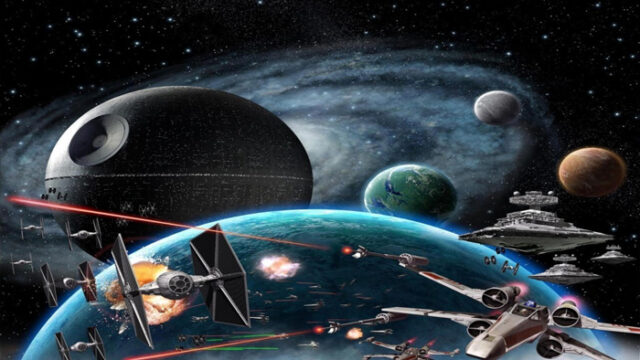 Whoever thinks Star Wars is just one blown up child’s tale should think again. The Star Wars world is a rather complicated and authentic universe stretched out through space and time, whose concepts, places and inhabitants cannot be grasped without paying close attention. We’ll try and sum up the galaxy focusing on most important planets in the Star Wars civilization. But first, take a look at infographic below:

On top of our list is the central planet – Coruscant – the capital and center of all political activities located in the Galactic Core. The total environment on this ecumenopolis is urban, and its activities are fully related to the government. The Galactic Senate and the Supreme Chancellor dwell in Coruscant. It has been the site of many battles between the ever opposed fractions of the Jedi and the Sith.

The next station on our galactic journey would be the planet Kashyyyk, in the Mid Rim region. This planet’s continents are mostly covered with wroshyr tree-filled forests, and the rest of it is covered with water. The native race is Wookiees, competent creatures who exploited the planet’s wood and oil reserves prior to being enslaved by the Galactic Empire.

We then make a stop at the planet of Naboo, a bit further away and closer to the Outer Rim borders. This primarily peaceful planet is the home of the Gungans, who occupy the underwater areas, and immigrant humans settled in surface colonies. One of the main industry sectors on the planet is plasma mining that is later put to use in weapon and vehicle manufacturing. Apart from that, this planet’s inhabitants valuate culture and defend arts. Some of the most distinguished characters from the saga originated from Naboo – Padme aka Queen Amidala, Jar Jar Binks and Senator Palpatine.

Once we cross the border and reach Outer Rim Territories we should point out the gas giant planet, Bespin. With a toxic environment, Bespin is a major source of tibanna gas. In a very high level of atmosphere where humans could survive Cloud City was created. This is where the gas is being refined and dispatched for use in blasters and as hyper drive coolant for starships.

Exploring the Outer Rim we come across a desolate planet of Hoth, an ice cube of a planet with a minimal number of creatures inhabiting it, free of human form of life. It remained so until the Rebels situated their Echo Base on it.

We move on to Endor, not so much a planet but a planetoid. Technically, it’s a moon orbiting the planet of the same name in a system close to the Unknown Regions. Home of the Ewoks, a widely spread food source, Endor later became the site of the battle that led to the fall of the Empire, embodied in the destruction of Death Star II. Too bad this colorful habitat of endless trees and various species is remembered as a war participant.

Next planet in our quest would be Sullust. Home of the Sullustans, this planet was referred to as the ‘volcano planet’ of partially molten surface. During Clone Wars period battles took place there, but apart from that the planets contribution to the galaxy is technological industry, manufacturing droids, ships and computer components.

Mon Cala, our next resort, is an aquatic planet in the Calamari Sector. Indigenous people of this planet, the Mon Calamari and the Quarren have lived in peace and harmony, despite their differences, until a civil war broke out during the Clone Wars period.

Yavin 4, a widely unknown galactic site, had a substantial role in quite a number of happenings during times of war and peace. It is a moon in the Yavin system, covered with rainforest, whose native people went extinct thousands of years ago before Yavin 4 started serving as base of the Alliance to Restore the Republic. The Battle of Yavin was famous for the destruction of the Death Star.

The journey takes us to Tatooine, a desert world inhabited by Jawas, Tuskans and various immigrants including humans. While orbiting two suns, Tatoo and Tatoo I, this planet acquired a harsh climate allowing inhabitants only to harvest moisture and live on moister farms, or rather deal equipment and scraps. This planet was the home or both Anakin and Luke Skywalker.

Concluding our journey, we’re visiting planets Rodia and Jakku. On Rodia, which is a hostile planet, Luke developed his Jedi powers and got familiar with the lightsaber. Jakku, on the other hand, home of outlaws and thieves, was a site of a galactic battle that will be remembered by the crash of the Imperial Star Destroyer.

Now you won’t get lost that easily, galactic traveler, while conquering the Star Wars universe. 🙂