Home Daily Infographics A Supercomputer In Your Pocket 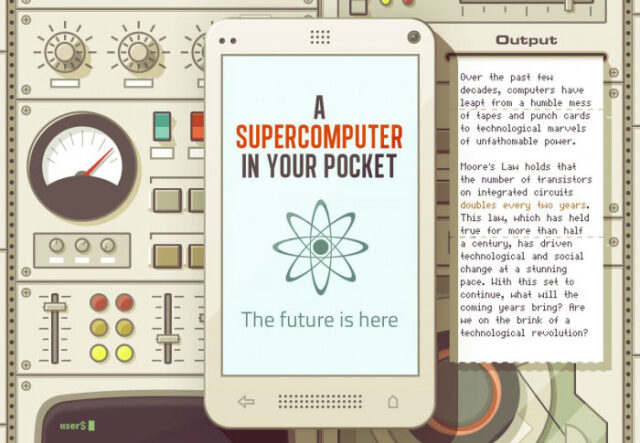 The future is now and here. Technology rapidly evolved so much to the point where it kicked off revolution of personal computers. What was once huge computer, could fit in your pocket now. This is a world of smartphones. There are more then 2 billion of them in the world and the numbers are constantly rising. It’s estimated that it will grow to over 6 billion devices by year 2022. People are worried that smartphones are making us addicted to screen or that we are overusing them but the truth is that they are etched in our daily life basis and existence.

What’s even more interesting is that the first landing on the moon was navigated by computer that had power like classic calculator. Your iPhone is 1000 times faster then that. The actual processor of PC at that time had 4 KB of memory, 55 watts of power and speed of 2 MHz and the price of it was $150,000 dollars. Technology is evolving in a way humans didn’t even expect. There’s a huge jump in the last 40 years. Just for comparison, 20 years ago world fastest supercomputer was called Connection Machine, and it was running at the speed of 131 gigaflops. Today we have a new holder of record coming from China called Tianhe-2 and it’s running at 54.9 petaflops which is stunning increase for 419,000. This is really incredible as it’s almost double of the speed of fastest American supercomputer Titan. You probably know about Curiosity Mars rover from NASA. Well, maybe you thought it was really powerful since it’s roaming around on the other planet but truthfully, iPhone has 4 times stronger processing power than Curiosity.

Japan is the country thats very advanced when it comes to technology and so is with computers. One of their supercomputers called ” K computer ” costs around $10 million dollars each year in energy costs. This is really crazy when you think about with that kind of money you could power 10,000 average homes in one year. You probably have middle range PC, powerful enough to run all the latest games but, truth to be told it would need 110,000 PC’s like yours turned on at the same time to simulate fastest computer from Europe which is running with the speed of 3 petaflops. Maybe you own the newest iPad from Apple, but remember iPad 2? Well if that thing was released back in 1988 it would be most powerful PC in the world, and until 1994 it would remain in the list of top 5.

If we really measure the speed of technology and rapidly fast innovations, we could come to conclusion of some of the future consequences this will bring to us. If we continue to evolve on tech level like this, than there are some that think by the year 2025, computers will evolve so much they will exceed and surpass their hardware barriers meaning they could be able to simulate human thoughts. As power of processors keep increasing, new generations in not so distant past will be able to create even more stronger simulations. One day, I believe people will create digital universes that have some kind of life. What’s even more, maybe we are in simulation right now. If not, I don’t like to think we will fail and wipe ourselves from this planet before we get to that point of singularity. It sure is exciting, to be at the front of technological breakthroughs.