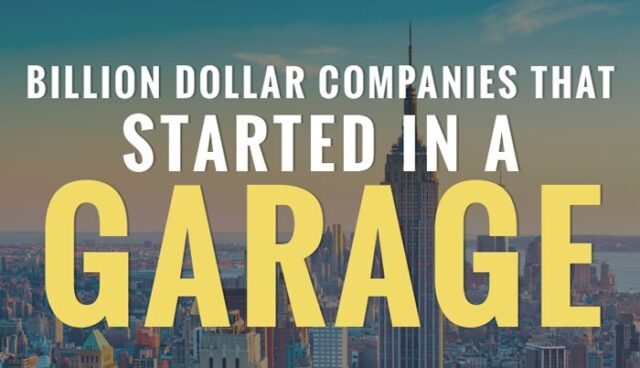 Have you ever thought of launching something but didn’t have cash or good place to step up your game? Well, you should know that even the giant companies today started their success in garages, believe it or not. Those companies had nothing when started, but with the little enthusiasm, dedication and motivation they achieved amazing things. One thing is for sure, they didn’t have any magical unicorn that could help them along the way. Amazon, Google, Apple, those are just some of the companies that had an idea developing in garage. They probably didn’t expect such high success or outcome but they dreamed of that with engagement, hard work and implementation of every idea into real action. No matter where you started, and how much money put put in a project, what will guarantee you a success is courage, commitment and passion. In order to give you some proof that everything is possible I wanna talk about some of the most successful companies in the world that started from nothing.

Google is one of those companies that actually started its future in a garage. Sergey Brin and Larry Page were 2 graduates from University o Stanford and they rented one garage from their friend in 1998. They started to work every day for many months until they finally developed something that would later be known as Google. Their primary mission was to create a webpage that could maintain and organize different types of information on one platform that could be accessed by millions of people around the world. Google is today probably the most famous search engine that has launched many other applications and useful websites such as Google Drive, Google+ or Gmail.

Apple is amazingly popular world famous brand, but not many people know that this company was also started in garage by 3 young guys. Steve Jobs, Ronald Wayne and Steve Wozniak developed their first computer back in 1976, in Steve Job’s parents garage. First computer called Apple-I was soled to local store for just 500 dollars and not too long after that they decided to create another Apple computer, second edition. Eventually they got famous producing many different tech devices and gadgets and today Apple is one of the companies leading tech revolution.

Every PC user knows for Microsoft company. Microsoft was also started in small garage in Albuquerguqe by 2 friends, Bill Gates and Paul Allen. They collaborated with famous computer store IBM on software operations and programming languages. Their first operating system was licensed for around 80,000 thousand dollars. Still, they didn’t stop and continued to work really hard. Eventually they created most impressive operating system ever, called Windows. Windows is probably most used software in the world. Around 80% of PC users are running this OS.

Amazon which is today one of most famous websites for buying various things also started in garage in Washington. More then 10 years ago, Jeff Bezos had an idea of creating bookstore online. He then proceeded to invest $40,000 thousand dollars in order to deliver and sell books to almost 50 countries. First book was sold one year later and since hen Jeff has managed to build one of biggest shopping stores online with Amazon.

Disney is the biggest media conglomerate and it also started in one garage that belonged to uncle of Walt Disney. At the beginning the name of company was The Disney Brothers Studio. Walt along with his uncle Robert started to produce Alice Comedies which would inspire the version Alice In wonderland. Few months forward Walt moved to bigger lot close to uncle’s house with his brother Roy. It was at that place where Walt signed professional contract with Universal Studios so he can start distribution of Alice Comedies, and the rest is history.

We see from these examples that great ides don’t have any boundaries. Doesn’t matter if you start small, you can become multi-billion dollar company if you are passionate enough to grow and bring that idea with you, along with having at least little privacy for yourself and in your room to concentrate on your craft.