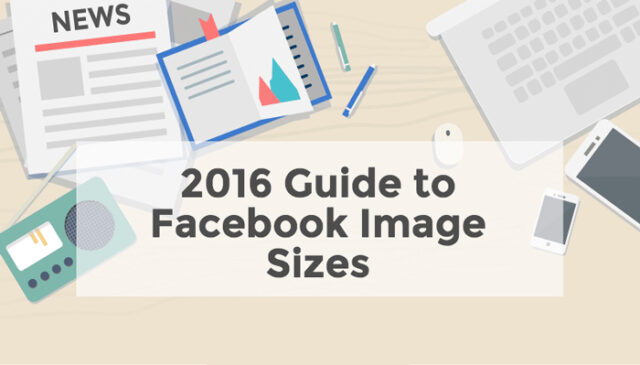 You probably know the feeling when you struggle to make your image fit in that tiny box for your profile picture? Or that your picture is too small to fill all the space for cover photo and not making your image distorted and too stretched at the same time? Yeah you’ve been there and you know the feeling. Finally you had to give up and cut out almost the best parts of your image, but even when you upload it, it’s being blurry. This can really be irritating. When Facebook was created and discovered, it was pretty much page that was all about text and links, but as the time went by, center stage of Facebook started to become picture. Now in 2016, they are essential thing for your identity. One of biggest site’s activity is uploading new images or sharing them between people. Of course, why would it be simple if it can be difficult. Facebook is also not making things easy for us. Every photo on Facebook is having its own size that’s unique. So for people, it can be little tricky to work out with image sizes, lot of them require some tweaks here and there to get the job done.

I want to start first with profile picture. Few months back in time, Facebook has made some little tweaks when it comes to cover photos, they made it more narrower, but it has also made them little larger then before. So, profile pictures are basically displayed at 160px by 160px. If you want to upload photo it has to be at least resolution of 180px by 180px. If an image is smaller then this, Facebook will not accept it for your profile picture. One useful tip is that, if you can, try using photo that is more of a square shape and not rectangle, this will require less cropping, so that image can fit better in the overall shape of profile picture. Like you probably already know this, profile picture is also being displayed by your name when you are having activity on Facebook posting, creating, publishing post or commenting something. Photo will of course be the same but size will change to resolution of 32px by 32px.

Next on the list is of course cover photo. Cover photo is set at top of your Facebook page, you really can’t miss that. If you want to upload photo, the perfect choice would be going by one which is at least resolution of 400 px wide and 150px high, even though dimensions of cover photo are 851px wide and 315px in height. Picture that is 720px wide will look the best. If you don’t want to be bothered by cropping photo a little, you can upload picture that’s larger than that resolution and you will have an option where you can move around your image and choose what to crop and how to display it. You got to remember something important, if you upload picture that is smaller then standard required resolution, Facebook will automatically enlarge that picture so it can fill the entire area and you are probably going to be left with picture that is blurry and low in quality.

When you publish picture on your profile, Facebook instantly creates thumbnail of it, with the resolution of 470px by 470px. So if you upload picture in landscape mode, the width of it will be scaled down to 470px. But the difference of this resolution can be seen when you upload vertical images, as they get aligned they will have blank white space on the sides. It appears for the reason that your picture is just too narrow. So remember this, the more your image is narrower, the more white space it will have.

Facebook is being used for marketing and driving traffic to apps or websites more than ever. So it’s becoming important not to make mistakes with designing images for your Facebook pages or profile. It’s good to know all the right dimensions for different parts.