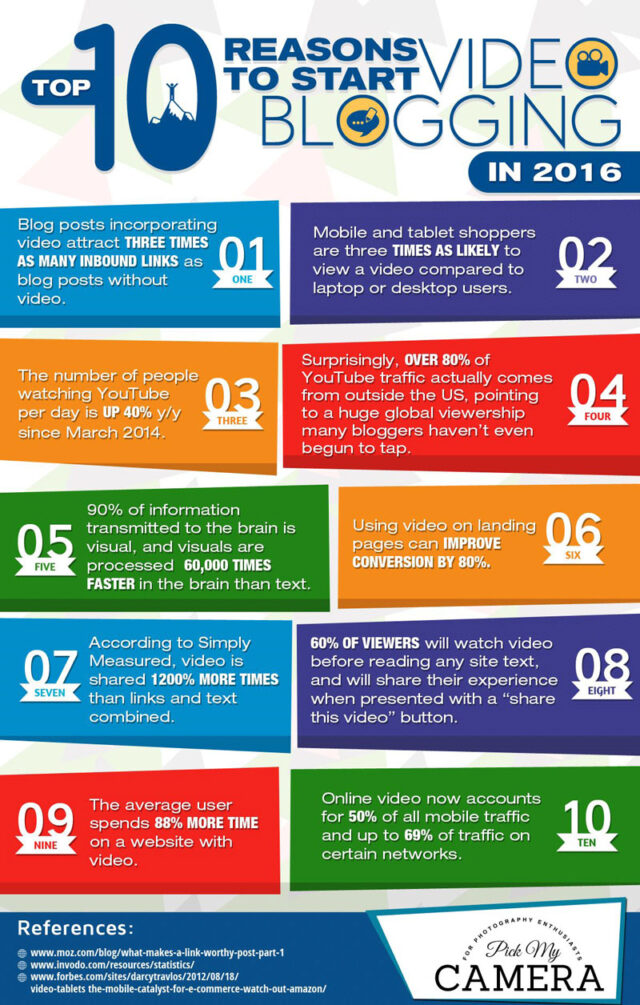 It is estimated that more then one billion people visits YouTube each month, and more then 7 billion videos are watched on a daily basis. Along with Youtube, Facebook is also having a mark with online videos. In january 2016, they published that Facebook has generated almost 10 billion video views and it has around 100 million hours of various videos that are being watched daily. I don’t have to mention that there are other platforms too which are generating big video views like Vines on Twitter or Twitch channel with video games being watched live. If you are not creating any kind of video content you are loosing awesome opportunities, because video blogging is considered as new way of writing in 2016. People that are using video blogging are having much better chances of attracting wider audience and stand out from the rest of competition. You could be creating videos and maybe become the next star of the YouTube.

So why would you start video blogging?

Well, not everything you can say with written text. People like to see audio, language, and visuals too. The truth is, you will have only 3 seconds to fully capture someones attention and tell your story. People are now having less and less attention, so you have to make sure to tell entire story in shortest amount of time. This doesn’t mean you need to have longer contents, but you will need something short and effective to hook in people. Internet has allowed us that anyone could express themselves. According to researches, 90% of information that is transferred to human mind is going trough visual learning, this is because people can process visuals 60,000 times more faster then written text. Your website would benefit so much from having videos, as around 88% of average users are spending more time on a page that has good visuals.

Don’t forget to include subtitles so that people from all over world can understand what you are saying. When you are starting at video blogging try not to spend too much money and immediately invest in very expensive camera. To practice and start you can use tools like your mobile or computer camera, since technology is so advanced camera quality is better on smartphones and new PC’s.When you start recording, it can be little scary seeing yourself on screen for the first time but remember no one was born with great presence on screen. If you are not good with talking on the spot, try to rehearse your talk before recording. Learn some basics skills of editing videos, you will have to do it when recording of video is completed.

No one can guarantee you that your video is going to generate thousands of views on YouTube in short time, because 300 hours of videos are uploaded every minute. You should try to optimize your videos and channel the best possible way since lots of videos are going unnoticed, focus on frequent upload or let the users know when next video is going to be uploaded. Always try to record and upload in HD quality and try to reach big base of subscribers. Watermark all your videos, and maybe even make a little teaser trailer to your channel.

You have to nurture your talent and realize changes that are coming while we’re constantly moving on with new technology. It’s important to adapt and real success will follow. We already heard a famous quote that picture is worth more then thousand words, but when you put it this way, videos are worth a million words.